As the words were leaving her mouth, a leader knew they didn’t reflect her true feelings. Later, she talked with her coach and learned seven steps for gaining mastery over runaway emotions.

Consequences of a hijacking

Kimberly lowered her eyes and spoke quietly. “I didn’t like myself very much at that point.”

“The minute I got back to my office, I knew I shouldn’t have said what I said. I can’t believe I thought, even for a minute, that Max didn’t have my best interest at heart. Of course he did. He always does.” She shook her head slowly and blew out a big breath.

I stayed silent. She was coaching herself more effectively than I could.

She looked me right in the eyes. “That feeling, watching hurtful words come out of my mouth and not being able to stop them, I hate that. It’s like my brain short circuits.”

“It does. It gets taken over. It gets hijacked.”

She gave a surprised bark of a laugh. “Good word! It feels like a hijacking. I’m standing there watching myself do something I wish I weren’t doing. And I’m helpless to stop it.”

“You know you’re not alone, right? When something triggers fight or flight or freeze, we say and do things that are all reaction, no thought. It’s called an amygdala hijack.”

“Oh, I’ve heard of the amygdala. That’s the lizard part of the brain, right?’

“Actually, the lizard brain is the brain stem. That’s an even older part of the brain than the amygdala. The amygdalae are about the size of almonds – there are two of them – at the base of the brain behind the eyes.”

“And what do the amygdalae do?”

“Well, they didn’t do a very good job controlling mine this morning with Max.”

“Actually, they did a perfect job of controlling your emotions this morning with Max. They took control of your emotions.”

“Oh. The hijack,” she said, making the connection.

“But why did they take control?”

“Somehow they sensed a threat. Do you know what set you off?”

“You bet!” she said. “Max told me he had delivered something to my boss that he and I had worked on. I had thought –well, I had assumed – we were going to present it to her together. So for that moment, before I could think about it, I felt left out. That’s what set me off. When I think I’m being left out unfairly, watch out! Or when I feel I’m being ignored, yikes! Those feel like big threats to me.”

“What is?” she asked, a little thrown.

“You just named your triggers.”

“It is. Triggers are feelings that activate a threat reaction. We all have them. But it’s impressive that you can say, ‘I get triggered by feeling left out or ignored.’”

“Well, I’ve lived with them a long time,” she sighed.

“I’d love to be without them. Any tips on how to kill my triggers?”

“Oh, I don’t think we can kill our triggers. When something feels dangerous or threatening, we react. Reactions are primitive. We can’t stop our triggers.”

“Are you asking if I have triggers? Of course I do,” I said.

“Off the top of my head? I’d say two of them are, when I feel ineffectual, and when I get frightened of a bad outcome.”

“And what happens to you then?”

“What does that mean?”

I took a breath. “I noticed that my hijacks felt like a fire roaring in me. And I wondered, ‘Where does that fire start?’ Over time, I found that before I would get hijacked, I could feel this fiery little ember like a hot coal in my gut. That was where the hijack started for me. In my body. And I could feel it.”

“I’ve got a different feeling before a hijack,” she said.

“Yes,” she said. “Mine’s like a rope around my chest. I can feel my heart pounding.”

“Like you,” she said. “If I’m not careful, I go wacky. But sometimes that feeling in my chest is like a big alarm. It’s screaming, ‘Watch out! You’re going to say something you’ll regret!’”

“That’s exactly what I meant about out-feeling the amygdala,” I said. “Your body can sense that alarm long before the executive functioning part of your brain can.”

“Does this executive functioning part of the brain have a name?”

“The prefrontal cortex.” I cupped my hand high on my forehead to indicate placement. “It’s where rational thought and self-awareness live.”

“So when your body warns you about a hijack, that’s your amygdala trying to take over?” she asked.

“That’s a good way to think of it, Kimberly.”

“But what you really want to do is keep your executive functioning brain online, right?”

“Exactly!” Shifting gears, I said. “I have a question for you.”

“You have two core self-management skills completely covered. Number one, you can name your triggers. Feeling left out or ignored. Check. Number two, you know where the trigger shows up in your body. Rope around your chest. Check. So if you can do those two things, what’s keeping you from staying online and stopping the hijack?”

She thought about that. “I don’t know. I’m thinking about this morning with Max. I don’t know what I would have said. I was really angry.”

“That I was angry so I would have said something I didn’t like. And I did!”

“Fair enough. So what would you have said if you had been angry and were able to keep your executive functioning online at the same time?”

“Absolutely! That’s partly how you stop the hijack. Stay online no matter what you’re feeling. You don’t give in.”

I asked again. “So what would you have said?”

“I have no idea!” she laughed.

“Well, think about this morning. Was the rope around your chest?”

“And then you started talking, right?”

“So, if you could freeze-frame that movie, and now, knowing everything you know, if you could speak from that executive functioning part of your brain, what would you say instead?”

“First, I’d probably listen. He hadn’t even finished explaining when I jumped all over him.”

“OK. Great. So one thing you could do is stay listening. That would stop the hijack.”

“Oh, yeah. If you’ve been hijacked and your emotions are flooding your system, you can’t listen. Forcing yourself to keep listening is a great way for executive functioning to stay online.”

“Now, suppose it’s your turn to speak. Right now. What would you say?”

She watched some movie in her head, then smiled in surprise. “Do you know what? I think I’d say the same thing I’d want to say five minutes later if I hadn’t gotten hijacked. If I could just slow down and not react, I guess I’d know what to say.”

“I agree, Kimberly. I think that’s the whole ball game, right there. When you stay online, whatever comes out of your mouth will be good enough. Just like it’s good enough the rest of your waking life.”

“You haven’t seen me at home!”

We both chuckled, then sat for a minute. Then she asked, “When I’m feeling the rope, but I’m not in full-blown hijack mode yet – “

“The executive part is still online?”

“Right. Would it be okay to say something like, ‘I’m not sure I can make good decisions right now. Can I take a couple of minutes?’”

“I don’t want to look out of control.”

I laughed. “Because it’s better to be in the situation you’re in now? Where you have to worry about what you said when you got hijacked?”

She laughed. “Touché.” She held two thumbs up. “I’m all for staying online. Stop the hijack.”

Which, of course, is the The Look & Sound of Leadership.

There were seven lessons in my conversation with Kimberly: 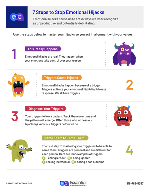