After missing a promotion, a leader considers whether she wants to ‘brand herself.’ Saying she has seen personal branding go badly, she discusses the how to’s and how not to’s with her coach.

Ailsa was pursuing a promotion to vice-president. Part of her campaign was lunching with the current VPs who, one day soon, she hoped, would become her peers. Their support was important.

During our coaching conversations, she decided that, at lunch, she would not be the one to bring up her promotion. If they wanted to talk about the promotion, great, she’d be happy to. But she wouldn’t initiate it.

She said, “But I hope that doesn’t mean I shouldn’t talk about myself at all!”

“What’s your concern?” I asked.

“Well, I hope there’s some moment when they ask me, ‘How’s it going?’ Like happens during an interview. ‘Tell us about yourself.’ I want that moment.”

“No, I’m ready for it. I had a boss who kicked our butts about moments like that. He used to say ‘A lot of business happens in these hallways.’ And at that company it was true! People were on the go and they stopped and talked with each other a lot.

“He taught us, ‘Be ready. Give a snapshot of your project. Have an opinion. Tell your point of view. Talk about your work like it’s the most fascinating thing on the planet.’”

“It was. Having those bullets ready gave me a lot of confidence. Like a gunslinger with a gun on my hip. Pyew! Pyew! Pyew!”

“He taught you to brand your work.” As if displaying an item, I said, “Here’s what the project is. Here’s what I think about it. Here’s why it has value.”

“Well, I influenced what people thought about my work, yes. Which is what I think I should be doing now – influencing how people think of me as a candidate. But I want people to think well of me. To me, that would not mean branding. I’ve seen branding go very badly.”

“I had this friend, Siobahn. We’d be in meetings, flipping through reports and she’d mutter, ‘I’m rubbish with numbers.’ She said it a lot. I thought it was sweet. She had the most delicious Irish accent and hearing her say it made me smile. But then, one day, I heard people say they didn’t want her on a team because they weren’t sure she could process the data. And I thought to myself, that ‘rubbish with numbers’ phrase had not been sweet at all! It branded her like a hot iron.”

“No! One night, she and I had a long conversation about our self-talk. I asked her if the phrase ‘rubbish with numbers’ was part of hers. Well, at first she thought I was a mind reader until I told her, ‘You say it all the time!’ She was horrified.”

“She hadn’t known she’d been saying it. But she understood in an instant why it had branded her negatively. Then, man, her Irish determination kicked in and I don’t think she ever said those words again.”

“She got vigilant about her self-talk, eh?” I said.

“Did she ever. And it made me wonder – do I have little phrases like that that I use about myself?”

“What did you decide?” I asked.

“What if branding was something positive instead? That’s how I think of branding: create yourself as someone people are attracted to.”

She looked away, nodding. Then she said, “I do something with my team that’s intentional on my part. I do it a lot, but it’s not the norm here. I wonder if it’s helping or hurting my brand.”

“I involve my team in my development. I talk about where I need to build muscle. That is not what VPs do around here. VPs here are supposed to be bullet-proof.”

“So it makes you different,” I said.

“That’s my worry,” she agreed.

“If it makes you different, could it be part of your brand – something that makes you attractive?”

“A feature, not a bug? I suppose. That’s an interesting take.”

“What would you think about, during your lunches, asking the VPs that same question? ‘Hey, this is how I’m different. Do you think it helps my brand?’”

“Ask their advice?” she smiled. “Several of them would be flattered, for sure. I just need to be careful about asking for advice. I don’t want to show up as the poor helpless female.”

“I trust you won’t,” I said. “If they turned the tables on you, if they asked you, ‘Hey, Ailsa, why is that your style?’ How would you answer?”

Her response was immediate. “I think leaders should show vulnerability. I think it’s courageous. And selfishly, it helps me. When I tell my team what I’m working on, and that I’d like their help with it, they help me get better a whole lot faster than I would on my own.”

“Would talking about that part of your leadership make you more attractive?” I asked.

“In this culture? Maybe. I’ll have to think about it.”

“Good!” I said. “Be intentional about your brand. Smart move.” 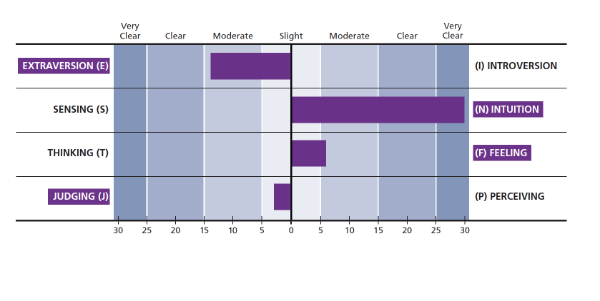 “You know what’s helped me when I have to talk about myself?” she asked. “Assessments. My Myers-Briggs had a simple little phrase that I still use.”

“Like it was easy to talk about your projects when you had those bullets,” I suggested. 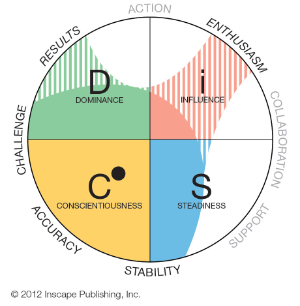 “You’re not alone using assessment language. I coached a guy who used verbatim portions of his DiSC report in his self-review. His boss – who happened to be the CEO – thought it was one of the best reviews he’d ever read.”

She laughed. “Did your guy tell him the truth?”

I laughed, too. “Good question! I don’t remember.”

“Do you think that was wise or sneaky?”

“I think it’s great. Just like ‘you bring out the best in people.’ If an assessment can give you language about yourself, why wouldn’t you use it? That’s how branding works.”

“What else should I be thinking about branding?” she asked.

I said, “One exercise I love relates to self-talk. But the most positive kind.”

“OK.” I slowed down and got quiet, painting a picture. “Imagine yourself at a meeting. You’re with other department heads. It’s lively. Lots of voices. Complex conversation. And on this day, you are a rock star. Every time you open your mouth, you add value. You make two or three suggestions that the group adopts on the spot. And it feels easy. It’s flow. You can feel it. Everyone there can feel it.

“Then you have to go to another meeting. You excuse yourself, gather your things and you’re out the door. After you’re gone, the people in the room look at each and nod their heads in admiration. They say, ‘Wow! Ailsa! She is great! She is so…’

“What are the next words? How do you fill in the blank? What words do you want them to use to describe you at your absolute best?”

With only the slightest pause, she said, “Smart. Strategic. Collegial.”

“Terrific. So let’s say those words are going to become your branding words.”

“Like a mantra,” I echoed. “And just as with a mantra, you don’t predetermine your behavior. You think the words, then see what happens. What does smart and strategic and collegial look like on you? It’s an exploration, not a performance.”

“I’ve seen the actual words come back to people.”

“Come back how?” she asked.

“One woman I coached focused on her branding words for about a year. You mentioned Irish determination. She was like that. Those words were activated in her head all the time. Then, in her boss’s review of her, two of her exact words showed up. And her boss had never used them about her before!”

She asked, “And it’s not like she’d been saying those words to her boss all year, right?”

I laughed. “No, she hadn’t. But that’s exactly what a different woman did. I loved this. I don’t remember what her branding words were, but suppose one of them was strategic. So when she’d speak up in a meeting, she’d preface her comments with something like, ‘Well, if I put my strategic hat on, what comes to mind is…’ She put her branding words right out there. And, since the word was accurate, people accepted it. They started thinking of her the way she wanted.”

During her subsequent lunches with the VPs, Ailsa tuned into her self-talk. She crafted her brand with precision. Every word she used about herself aimed at painting a portrait of someone who was quite adept at The Look & Sound of Leadership.