How to Coach Your People

A no-nonsense leader is asked to add coaching to her list of duties. She turns to the coach who coached her for a quick immersion course.

How to Coach Your People

Laurel was no-nonsense. Whether talking about her kids or her enormous workload, Laurel cut to the chase. With Laurel, there was no drama.

The goal for my coaching with her, perhaps unsurprisingly, had been to “warm her up.” And we did! That was two years ago. She’d risen quickly since then. Recently, she reached out asking if we could have a Zoom coffee.  I said sure.

After we’d caught up, she told me her reason for calling. Her new boss was evangelizing all his direct reports to become coaches as well as bosses. He believed bosses who were also coaches would keep people more engaged. He saw it as a retention strategy.

Laurel said, “Personally, I think it’s insulting to professionals like you. As if I could do what you do just because he tells me to? I don’t think so!”

“Well, for starters, I don’t read people like you do, Tom.”

“I don’t know that you have to,” I said. “I don’t think your boss is expecting you to turn into a professional coach. I think he’s asking for a certain set of behaviors. A certain way of thinking.”

“And you think it’s in my reach?” she asked.

“Okay. Good. That’s why I called. So, uh, can you turn me into a coach before the end of the call? I really need some help!”

“You bet!” I said. The opportunity to talk about being a coach/boss was like offering a dog a bone.

I rubbed my hands together, smiling, and said, “I’m going to start with sharing a model. Four steps. When you want to coach one of your people, just think these four steps. They’re good. You ready?”

“Shoot!” she said, picking up her pen and adjusting her pad.

“Tidy bit of naming,” she said.

“It’s been around forever. There was a guy in the 1980’s who’s like the grandfather of leadership coaching. Sir John Whitmore. He came up with this back then. And it’s lasted. It works. So here we go. Four steps.”

I said, “The ‘G’ stands for ‘Goal.’ I don’t know if you remember back around when you and I first met. You and I had a lot of goal setting conversations. Our very first conversation was about goals for the coaching.”

“And after your 360. We talked about goals again. You can do that when you’re coaching your people. Imagine that talking about the goals is its own phase in the coaching. I remember with you, every time we talked about the coaching goals, you got to think out loud about the whole idea. It gave you time to build a little muscle.”

She said, “I remember thinking at one point that I actually already understood something better than I had and the coaching hadn’t even begun yet. But you’re saying it had begun.”

“Well, you had begun your own coaching, yes. My point here, Laurel, is that you, the coach, can take time to talk about the goals. And it’ll keep you from jumping in and fixing anything. Because you’re a coach, not a manager. No fixing.”

She raised an eyebrow and said under her breath, “Easier said than done.” Then, “Can you just give me a script here? What do I say?”

She was writing. She asked, “Is that like dropping a bomb?”

“Who knows? Find out. Name the goal then stop talking. Throw the ball to them. Ask them questions. Let them go first. What do they think about that goal? What’s been their experience of it up until today? How far back has it been in their life?”

“True, I am. I hope I’m right! Here’s why. I assume you, as the boss, will select a goal that’s been introduced at least once before. During a performance review, maybe. Somewhere. Your goal isn’t going to come out of the blue, I hope. And the person probably knows it’s one of their development areas. Most of us have been hearing about our ‘development areas’ since high school.” I used air quotes.

She laughed. “You got me there!”

“So ask. What do they think about the goal? And listen. By the way, I hope you’ll avoid one big pitfall. Coach bosses often pick three or four goals. Suddenly instead of one goal to work on, there’s a list. It’s too much to focus on all at once. Pick one goal.”

I laughed. “One goal’s not enough? You suddenly in a hurry?”

She shook her head and rolled her eyes. “The competitor in me! Okay. One goal at a time. Fine. So what’s the ‘R’?”

“Sounds like me slapping sense into people. I’m going to hit them with reality.”

“Oh! That’s not how I meant it, at all! Although I suppose that could happen. But, no, this is about them discovering their reality. This is where you, as a coach, become the best listener you can be. You ask open-ended questions. You express interest. You withhold judgment. You’re listening for their reality. What’s their view of reality through the lens of this goal?”

“Me? Withhold judgment? Let’s hope! Ha! My husband would be happy if I could.”

“And open-ended questions? I’ve tried. It’s hard! It’s not how my brain works.”

“What if their reality is completely skewed?” she asked. “I can’t let that stand, can I?”

She gave a little laugh. “Could be dangerous!”

“Here’s a way you might think of it. You each are on your own mountain looking down into a valley that’s between you. Your views are different but the destination is the same. This reality conversation is like the two of you comparing maps. They’re both valid. Listen to them describe their view. You say, ‘Oh, so that’s how you see it. Here’s how I see it.’ Then throw the ball back to them. ‘What does my version sound like to you?’ And you keep listening to their reality.”

“But I’m going to do some course correction if I think it’s needed.”

“Hold back as long as you can, but, of course, yes, you might course correct. You’re the guide at the side. Keeping everyone safe is one way you as coach contribute to this reality part of the model.”

“No,” I answered, “more like ‘What do you think your options are?’ Ask a question. No telling. No advising.”

“But wait,” she said, “isn’t this the moment of truth? I don’t know what ‘W’ will be, but isn’t ‘Options’ the time to stop talking and take action?”

“It’s time for them to figure out what action they want to try. Remember, you’re coaching, not managing. Your job as coach is to help them learn, not make them perfect. They might make a mistake or two. But, yes, ‘options’ is about helping them move forward.”

“Here’s what you want to listen for. Listen for yourself saying things like ‘What you should do is…’ Or, ‘Here’s how to do that…’ When you hear that, stop. No telling. No advising.”

“But I want to share what I know,” she said.

“Please do! Yes, of course. But talk about yourself. Tell your story. ‘Here’s how I’ve thought about this in my own career,’ Or ‘Here’s something I try to remember in those situations.’ Or ‘A strategy that’s worked for me is…’ Make it about you.”

“I know what you’re doing,” she said, accusingly. “’Talking tentatively.’ That’s in Crucial Conversations, isn’t it?”

“Oh, nothing. It’s just not my style. I understand why talking tentatively belongs in a coaching conversation. It’s so they can develop their own thinking, right?”

“No! It’s just not my style. None of this is really my style.”

“But it’s not beyond you, Laurel. It’s a stretch, not an impossibility.”

“Would you like to get better at talking tentatively?” I asked.

“I suppose. I know I’d be a better mom if I could talk more tentatively sometimes.”

“Here’s a secret for talking tentatively. Anytime you tell anyone anything, remember – you could be wrong. It’s possible. There is no one version of ‘right.’ There’s only your experience which is different from my experience. And both are valid. If you speak from what you know and accept you don’t know everything. talking tentatively follows pretty naturally.”

“You know, I have heard one word about myself forever. ‘Forceful.’ I think this is why. It never occurs to me I might be wrong.”

“But it’s going to make me a lousy coach. One more stretch. Whoopee,” she deadpanned. “Can we go to ‘W’?”

“Sure. ‘W’ is ‘Will.’ Or ‘Way Forward.’ It’s getting the person to self-coach towards their goal. Ask them, ‘How will you execute?’ ‘What’s your plan?’ ‘When will you do it?’ ‘What might stop you?’ ‘How will you measure success?’ ‘How do you want to revisit this with me?’ You’re bolstering their will by getting them to picture execution.”

“But still, this is them creating their development map for themselves. You’re the coach on the side, taking notes and holding them accountable. You’re not creating the regimen or telling them what to do.”

“Okay,” she said. “I get it. So let me ask. If I’m going to talk about these four ‘GROW’ steps, how long does that take? Is this one 60-minute coaching session?”

“If you’re coaching someone who’s really nimble, maybe. But with most people, I’m guessing you’ll have several conversations before you see real movement. Then once you do, you could bring another goal to the table and start the cycle again.”

Laurel reported back that, at first, her skills as a coach felt awkward. Practicing them with her family helped make them more comfortable. What excited her most of all was that, as a result of her coaching conversations, she saw many of her direct reports begin to show The Look & Sound of Leadership. 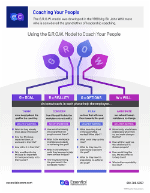 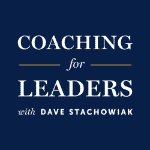 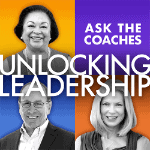 How to Build Executive Presence
Unlocking Leadership – Ask the Coaches 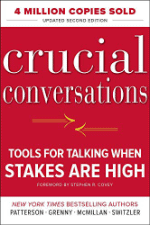