How to Grow Your Self-Management

A leader feels she lacks courage. She engages her coach in a conversation about how to use self-awareness and self-management as tools to help her become a little bolder.

How to Grow Your Self-Management

Chin Sun and I were discussing the discipline of self-awareness. During our coaching conversation I said people high in self-awareness are able to get their emotions working for them instead of against them.

She challenged that. How exactly, she wondered, did self-awareness help people get their emotions working for them.

I laughed and said, “Good point. It’s not only high self-awareness that allows them to get their emotions working for them. It’s also the ability to self-manage. It’s self-awareness and self-management together. You can’t have the second without the first.”

“What about the other way around? Can you have self-awareness without self-management?”

“That’s an interesting question, Chin Sun. What do you think?”

“I suppose you can, right? Like suppose I become aware of some pattern of behavior I have with my daughter. Just because I know I do it doesn’t mean I won’t do it over dinner tonight.”

“Makes sense,” I agreed. “This sounds like how I talk with people about eliminating ‘um’s.’ Awareness is only the first part of it.”

She looked amused. “You talk with people about eliminating ‘um’s’?”

I shrugged and smiled. “What can I say? I’m a communications coach. Non-words are part of communication. We’ve all got ‘em. But sometimes someone’s got a really bad case of them. You know, when they’re so bad you start counting them?”

She laughed. “I had a direct report like that. I could not listen to her!”

“Which is not good for her career, right? So yes, with someone like that, I talk about eliminating ‘um’s’ by using self-awareness and self-management.”

“You’re saying the same principles apply to eliminating ‘um’s’ as to getting my emotions working for me?”

“I am! I think the cycle of self-awareness and self-management is the same for any behavior you’re trying to change. Can I give you my spiel about ‘um’s’ and you tell me if you think it applies?”

“Sure,” she said. “I’m imagining a singer with the notes coming out, too.”

“Great! Next picture this. Suppose you want to stop saying ‘um.’ What’s the first thing to do? You have to begin noticing the ‘um’s’. You have to become self-aware of something that’s been invisible. Not easy! But suppose you put some effort in and you do manage to notice one. What’re you going to notice? You’re going to notice an ‘um’ that’s way out there on the stream of air, an arm’s length away. That’s where awareness gets you. Now, if you want to stop saying them, you have to engage self-management.”

She was nodding and following along.

With surprise she said, “That makes sense. I think I was imagining self-management like some light switch. You’d just choose it, then do it. But of course it’s not that way. Of course it takes practice. So how would I apply that to getting my emotions working for me?”

Emotions for or against

She answered, “When I don’t speak up.” I stayed silent as I watched her follow some thought. Then she said, “I’m severely lacking in courage.”

I nodded. Then I asked, “If you were going to set a goal for growing your courage, what would it be?”

“OK,” I said. “Suppose you were going to use self-management to help you speak up confidently more often, what would you do?”

She looked away from me, imagining. “I’m picturing myself stuck in one of those debates in my head. One voice is telling me, ‘Be quiet. They don’t want to hear from you.’ The other voice is telling that first voice to shut the hell up.”

“Most of time? The fearful one. That’s the problem. I’ve got awareness but not enough management.”

I said, “I’m curious, Chin Sun, has the percentage changed over time? Do you speak up more now than you used to?”

I laughed and wagged a teasing finger at her. “What did you say a minute ago about growth not being a light switch?”

I said, “OK. Good for you. You are summoning up your courage and reeling in your fear a little at a time. That’s a good example of how your self-management is getting your emotions under control.”

“I guess,” she said without conviction. Then she asked, “Do you have some self-management tools to help me get there faster?”

I nodded and said, “When you’re having that inner argument with yourself, there’s a question you could ask yourself. Ask yourself, ‘If I don’t say this now, will I regret it later?’”

“Ooh, that might be good,” she said, nodding and writing it down. Then she smiled and said, “I’m thinking my daughter might benefit from the opposite question, ‘Will I regret it later if I do say this now?’” She leaned towards the camera and, in a mock whisper, said, “The girl doesn’t always have the greatest self-management over her mouth.”

I laughed. “She’s in good company. As a coach, I talk with a lot more people on her side of the struggle than yours.”

She laughed knowingly. “There is a lot of hot air out there, isn’t there?”

She spoke as she wrote. “These would be good for my daughter!”

While I sketched, she said, “Pausing feels like the opposite of what I’m aiming for when it comes to speaking up. But in other cases, like with Diana, my daughter, for sure.”

Self-management and The Pause

I held up my drawing.

She laughed and quoted herself. “Rich self-centered bastard.”

“Right. That was your thought. The event, the feelings and the thoughts all happen without your control. You might even have follow-up feelings, like ‘I want to teach that bastard a lesson.’”

She laughed again. “I know that feeling!”

“Which leads to an Action,” I said, pointing at the word. “I step on the gas and come right up on his bumper.”

She shook her head. “So dangerous.”

I nodded in agreement. “Bad judgement, right? And how did you get there?” I touched each word as I spoke. “Something happens. You have feelings. You have thoughts. And you act. No pause. Just bang, bang, bang, one right after the other.”

“I know that progression. It’s hard to pause!”

“Isn’t it?” I lowered the drawing and added to it. I raised my pad again.

I said, “Self-management inserts a pause between the thoughts and the action. You get choice. Like asking myself, does this really need to be said by me now? That’s choice. Or do I really want to drive that way? Really?”

Chin Sun nodded thoughtfully, saying, “You know what I’m thinking? I’m thinking it’s more than just choice. It’s about values. If I could turn up my self-management, I might behave in ways that are more aligned with my values.”

Our conversation about self-management and values, and whether emotions can actually be controlled, is next month’s episode of The Look & Sound of Leadership. 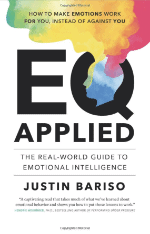 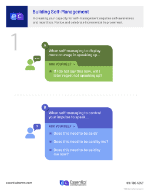 Download a free PDF showing the two exercises from this episode, plus our Feeling Word Grid.