How to Stay Calm Under Fire

How to Stay Calm Under Fire

Nigel had been hired as a member of the CEO’s executive team. To date, he’d made two presentations to the Board of Directors. Mandeep, the CEO, felt both could have been better.

Mandeep felt that Nigel’s skills were good overall, but to succeed with this Board, Nigel would need to stretch in two areas: tell a better business story and be more responsive in the moment. Mandeep asked me to coach Nigel on both goals.

Nigel and I had talked about turning data into stories, the first goal. Now we turned to the second goal, be more responsive in the moment.

I asked Nigel, “What do you think he means by that?”

Nigel answered, “I like to stick to my script. When people start firing questions at me, I get thrown off. He wants me to, I don’t know, go with the flow, I suppose.”

I asked, “But he also wants you to get through your material, doesn’t he?”

“He does indeed. You see my dilemma. Why can’t they just wait until I’m finished?’

He was a bit sheepish. “It’s a form of nerves, I suppose. I have high standards for myself. I put a lot of time into my prep. By the time of the meeting, I’m primed and ready, like a horse in the gate. I wish they’d just let me do what I’ve prepared.”

To script or not to script

“You said you do a lot of prep. Do you write a script?”

“I do, indeed. Helps me put my thoughts together.”

“Do you read the script to them?” I asked.

“Read it? No. By the time the Board meeting comes, I know it pretty well so, no, I don’t read exactly. But I have it all printed out if I need it.”

“Oh,” I said. “What would you say if I suggested that the script might be part of why it’s hard for you to be responsive in the moment?”

He took a second, then asked, “You think wanting to stick to my script makes me grip the wheel a little too tightly?”

I shrugged, “Well, if you’re focusing on following your script instead of listening to your audience, it’ll be hard to be present, yes.”

He said, “That frames it differently.” Then he gave a little shudder. “This is going to be a hard habit to break. I’m a bit of a control freak, you know.”

I gave a little laugh. “What if we just give you something different to control?”

Now it was his turn to laugh. “That sounds delightful!”

Steward of the lands

“Imagine that you are the steward of an enormous tract of land. There are hills on this land. There’s forest. There’s a lake and a river. There are roads and fences, plants and animals, and you’re responsible for all of it.

“There are people, too. These people keep the land healthy. They have their boots on the ground and are doing the legwork. But you’re the steward: those people come to you with questions when they need to. But for the most part, they know their jobs and so do you.

“One responsibility you have as steward is to help people see the land the way you see the land. This helps you create allies and supporters. So when visitors come from outside, giving them a good experience is an investment in the long-term health of the lands.”

He gave a little laugh. “I’ve been accused of having a very sour face when I get a stupid question. I suppose by your definition that wouldn’t be ‘a good visitor experience.’”

I laughed, too, “I suppose not. But I understand the feeling, because, well, some visitors who show up are familiar with lands like yours, right? But some aren’t! So, yes, there’ll be smart questions and dumb questions. But everyone is a possible ally. So in order to make the best experience possible, what do you do? You begin to plan for the visits. You get intentional.

“You survey your lands. You ask yourself, if someone is interested in water conservation, what am I going to show them? Or if they want to know about invasive species, what should I show them. You begin to think of your land with giant signposts all over it. You assign meaning everywhere so you can tell the story of the lands.”

“It is!” I agreed. “Now here’s a question for you. Suppose you’re all prepped for a group of visitors. You’ve got the tour all planned. You’re going to start by showing them the fish hatchery. But when they show up, they want to see old growth trees. What’re you going to do?”

“Show them the trees,” he said.

“Without the sour face?” I asked.

“I suppose,” he said with a sigh. “Not so sure this sounds like I have all the control if they’re the ones dictating the presentation.”

“Nigel, does it really matter which order things go in? Does the hatchery have to be first just because you thought of it? If it’s not what interests them, show them what does. Once you’re done, then take them to your fishery. You’ll get there eventually.”

“I’m trying to picture how this would actually work with the Board. It feels like an invitation to a hijacking.”

Host of the information

I nodded. “And to me it feels like an invitation to a buffet. I imagine I’m the host who has laid out all this information about my lands. You know, in real life, when I present, I am always in someone else’s space. It’s helpful to remember that in fact these are visitors to my lands where I am the expert. I am the keeper of knowledge. I’ll guide them wherever they want to go – because to me it’s all interesting. And no matter where we go, I’ll provide value because I’m the expert.”

I went on, saying, “Nigel, I’ll tell you how far I take this. If I am creating an interactive session, I’ll assemble all the pieces but practise them in different orders. Rehearsing that way gives me command of the material and helps me stay nimble, too. Then, if something unexpected comes up, it feels like just one more variation. No big deal.”

“An instructor once observed that I liked to ski the same path down the mountain time after time. He was right. I liked going over the same ground and getting better with each run. But he thought I’d become a better skier if I’d ski across more of the mountain. Have different experiences. He thought it’d build broader mastery.”

“What happened?” I asked.

“It took me one more season before I stopped skiing in my tracks. But he was right. It made me a better skier.”

I asked, “Could we say it made you responsive in the moment?”

He gave a surprised laugh. “I suppose!” Then he asked, “You’re not suggesting I show up without preparing a presentation, are you? I’m not taking my hands off the wheel altogether, am I.”

“No, you’re not,” I said. “You will always be the guide. You’re the expert. And as the expert, it is your job to sort the information about your lands so it makes sense to your visitors. Create the hierarchy of information. What’s most important? Then, if you decide it’s important they see the fishery before they leave, get them there with as much grace as possible.”

“Again, no sour face,” he said with a smile.

“Right! Because control of your material isn’t a battle to be won. It’s a visit from possible allies and you are the host.”

He smiled and said, “This makes me think of my oldest brother. He was always a raconteur, even as a boy. I remember how much I admired his ability to tell the same story a dozen different ways depending on the setting. One time it would be hilarious and you’d be shooting cola out your nose, and another time it would be a tearjerker. Same story!”

“What made you think of that?” I asked.

“Well, he was being responsive in the moment, wasn’t he? He could see what would serve the moment and he delivered.”

Nigel shifted from feeling that questions from the Board were distracting interruptions to seeing them as opportunities and expressions of interest. He became more welcoming. Mandeep noticed the shift and felt his responsiveness in the moment was a better display of The Look & Sound of Leadership. 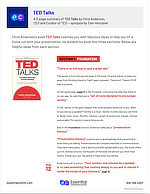