How To Turn Data into Stories

A leader is given a presentation coach and two goals: ‘tell a better story’ and ‘be more responsive in the moment.’ This episode is the coaching conversation about telling a better story.

How To Turn Data into Stories

Nigel was a Brit who loved language. He took pride in being well-spoken. So when Mandeep, his CEO, told him his first presentations to the Board of Directors hadn’t been up to par, he was a bit stung. He’d had a flash of anger when Mandeep suggested he work with me.

Prior to our first conversation, Nigel and I each spoke with Mandeep to hear his goals for Nigel’s coaching. In my conversation with him, Mandeep was clear that he thought Nigel was a good presenter who needed to get better at two things: telling a better story and being more responsive in the moment.

When Nigel and I compared notes, he’d heard the same two goals. I asked him what he thought they meant.

He answered, “That first one, that story one, that makes me shiver. I’m no storyteller, Tom. I’m a data head. When someone asks me to tell a story, I tend to bore them with facts. Just ask my wife!”

I asked, “So where do you think you’ll find the solution?”

I laughed, too. I considered a second, then asked, “Do you like lists?”

“I have a list that might be helpful,” I said. “I originally created it for a team. It was a list of questions – questions to ask yourself before you write your first bullet point. The list was to help team members tell stories their listeners would love. It might help here.”

“Maybe twenty. I don’t remember them all. I know some are ‘just the facts, ma’am,’ kind of questions. ‘How much time do you have?’ ‘Are you the only speaker?’ That sort of thing. Other questions are more demanding.”

“For example?” he asked.

“For example, ‘Why would they listen to this?’ I love that question. Answering that kind of question will help you tell a better story.”

He said, “Not in my case, I think. The reason they listen to me is because they’ve never seen numbers like this before.”

I laughed. “I’m glad if that’s your story, Nigel. What a nice story to tell. If that’s the case, why do you think Mandeep is saying you need to tell a better story?”

“True,” he said. “I’m boring them to tears with all my details.”

“Because without proper investment those numbers are only going to last two years. Three tops.”

“That sounds important,” I said. “Have they heard that from you?”

“Hmm. Probably not as clearly as that. So I take it back, that question was revealing. Will you send me that list?” he asked.

“If I answer all twenty questions, will I tell a better story?”

“Then let’s keep going. What else can I try?” he asked.

I said, “When I want to be sure I tell the best story I can, there’s one question I always ask myself. I find it very helpful. I ask myself, ‘What questions do I want them to be asking themselves about my material?’”

“Sorry. Okay. This starts with a premise. I presume people listen to me more closely when I talk about something they care about. And when people care about something, they want to know more about it. Questions pop up in their heads. That’s natural. So I ask myself, ‘What questions do I want them to be asking about the story I’m telling them?’”

He asked, “And what’s the answer? I’d like to know because I’m not certain I want them asking any questions at all about what I’m telling them.”

“Here’s my thinking,” I said. “I want them asking themselves the same questions I ask myself. So I might say something like, ‘Seeing a number that high always delights me. Whenever I see a number like that, I ask myself…’ And then I tell them the question I ask.”

“I like that. That’s good. But wait. That takes me straight into the weeds which is exactly where Mandeep does not want me.”

While making a note he said, “What else have you got?”

I said, “If you want to tell a better story, make us care.”

I help up two fingers and continued, saying, “Make us care by doing two things. First, give us a hero, someone to root for. Help us understand why we should be rooting for them.”

He asked, “You don’t mean an actual person, do you?”

“No,” I said. “Your hero could be that quarter’s numbers. That customer contract. That milestone on a project. Or the project itself. The hero is an outcome we can all root for.”

Listening intently, he gave a grunt then said, “You said there are two things?”

“Yes,” I said. “First, the hero. Second, put the hero in jeopardy. When you read the data, is there some shadow on the horizon that makes you worry about the hero? Tell us about the shadow. And tell us what the hero needs to protect against the shadow. That shadow is the story.”

He said, “I just flashed on a literature professor of mine. He was endlessly saying there is no story without conflict. That’s what you’re saying, right? People pay attention when storm clouds come.”

Nigel seemed fired up. He went on. “This is a weird connection, but you know what this reminds me of?”

“Building puzzles. My sister and I used to build puzzles for each other. Did you ever do that?”

“I used to make board games, but I don’t think it’s the same,” I said.

“No, probably not. What’s delicious about creating a puzzle is that you have to start with a crystal-clear end in mind. What do you want the person to do? Answer a question? Find an object? Decode a message? You can’t build a puzzle until you know the end.

“Then, and this was the part I loved, then I’d work backwards from the end to build the most convoluted path I could. But not too convoluted or you kill the fun. I was so intentional placing every piece of information just so. You’ve put me in mind of how important it is to start at the end, then lay the stones correctly or people lose interest.”

“I love that, Nigel. That sounds like telling a better story.”

With a little scowl he asked, “Don’t I become the voice of doom, then? Always with the warnings. Always with threats in the future.”

He shook his head. “It’s hard. I still want to explain the data to them. But I see that telling a story is better. So what about Mandeep’s second goal? Be more responsive in the moment. What about that?”

Our conversation about how to stay present while presenting is next month’s episode of The Look & Sound of Leadership.

To tell a better story: 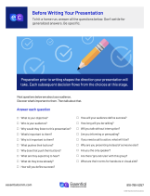 Before Writing Your Presentation