How to Turn On Your Executive Thinking

A senior executive worries that his lieutenants are not being taken seriously by the senior leadership team. He discusses with a coach how to help his rising leaders accelerate their growth. This is that conversation.

How to Turn On Your Executive Thinking

Failing in Front of Senior Leaders

Rizwan had a vision for the leaders running his business unit. There were roughly 40 of them and he wanted them to mature as leaders. He was hoping I could create an event that might help them get there faster. We arranged a lunch to trade ideas.

I was looking forward to seeing Rizwan again. He was two years into his tenure at this Silicon Valley giant but I’d first known him ten or more years ago as a senior leader at a different tech giant. Back then, he’d impressed me as razor sharp without being prickly. Over the years, when I would speak about “The Look & Sound of Leadership,” he was often one of the executives I’d picture as an exemplar.

Now, over lunch, he was sharing how the current situation had come to be.

He said, “One problem they had when I got here was that their promotions were all screwy. There were no standards or procedures so people got promoted for all kinds of reasons. Now we’re paying the price. We have people in leadership roles who see themselves as team members, not team leaders.”

“What’s the impact of that?” I asked.

“They’re failing with the senior leaders. They come into those meetings and they talk about the wrong stuff. Senior leadership doesn’t think they’re the leaders of their own businesses, but I need them to be.”

“And your people know this?” I asked.

“They’re starting to. That’s part of what I want from you. Give us some language to help us get better.”

“Happy to,” I said. “So tell me, what do you want them to know about being leaders that they don’t know now?”

He stopped and thought. I’d always appreciated Riz’s ability to uncouple from a conversation and turn his mind inward with no self-consciousness. It was one more attribute I admired in him.

Think from Higher Up

After a moment he said, “I want them to know two things. First, they have to start thinking like the executives think. They have to think from higher up. They’re at the wrong altitude. They go in front of senior leadership and they talk about every freaking piece of work they’ve done instead of just telling us, ‘This is where we started and this is where we got to.’”

“This is widespread?” I asked.

“It’s most of them, yeah. It’s the same when they present their work to me. They don’t tell me things I care about. I need summaries and analysis and opinions, but what I get are reports about how that little widget over there got turned two degrees. And I don’t care!”

“Have you told them this? I’m trying to understand what they’ve heard and why they can’t close the gap.”

“I’m not sure,” he said. “The feeling I get is like talking a kid on the sidewalk in front of a skyscraper. You point up and you say to the kid, ‘That’s the fortieth floor up there,’ but that doesn’t mean the kid can picture what’s it like to look out that window and see what forty floors up looks like. Maybe my folks can’t picture the right altitude because they’ve never been up there before.”

“Well, wait, though,” I said, “if it were just a failure of imagination how would anyone ever learn to think like an executive? Everyone has to learn how to operate in that higher altitude. You must’ve learned it somehow. How did you do it?”

He smiled. “I had two great mentors. And I studied it in school so I was thirsty for it.”

“I did,” he said. “But I was a hungry student. I believed that there was a thing called executive thinking – that some people thought on a higher level than other people. And I wanted to be up with those high level folks. It was an ambition of mine, like learning to live in a new country. What worries me about my folks, at the moment, is that I’m not certain they know executive thinking is a thing.”

“I can’t say I’m all that surprised,” I said. “I hear this complaint – that employees are operating at the wrong altitude – from a lot of leaders. Over the years, I’ve had this conversation a lot.” 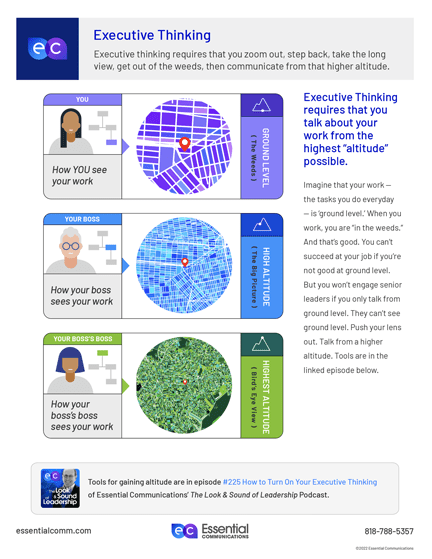 “I have an analogy I use. It’s based on the idea of clicking out on a map. You start clicked in. You see your house and your driveway and your roofline. That clicked-in view is the level you’re operating at every day when you do your work. Driveways and rooflines. But click out a couple times, suddenly there’s a whole neighborhood and your house doesn’t look so important. That’s the altitude your boss lives at in relation to your work. Your house is still there but there are a whole lot of other things, too.

“Click out three times more,” I went on. “That’s your boss’s boss.Your house might be visible if it has a pin but otherwise, it’s too small. And the analogy goes on, but you get the idea.”

“Is that something you could do with us?” he asked

“Sure, it works great with groups. It sparks interesting conversations.” I asked, “You said there were two things you wanted people to learn about being better leaders. So the first is altitude. What’s the second?”

Run Your Own Business

“Oh. Okay. Here it is. They have to own their businesses. Don’t come to me and ask me what you should do. Don’t wait to be told. Make decisions. Make recommendations. Take a stand. Maybe we’ll disagree. That’s okay. That’s what we’re here to do. It’s business. We’re all trying to figure out what’s the best thing to do. And we will. But the decisions should start with them, not me.”

“Why isn’t that happening?” I asked.

“I don’t think people know the opportunity is there. I think they’d take it if they saw it. But they weren’t taught to think that way. They were taught to be cautious and ask permission. That’s not what I want from them.”

“You think it’s cultural,” I said.

“It could be a lot of things, but whatever it is, it’s killing me. I’ve got plenty to do without making their decisions, too.”

I nodded sympathetically. “I’m sure.”

I made air quotes and said, “’Your boss is your biggest customer.’ I’ve been saying that for years. And if you are my biggest customer, it’s one big hairy faux pas for me to give work to you.”

“I’m a little impatient sometimes because I know we can go faster. I’m hoping you can give us a shove in the right direction.”

“I think I can,” I said, Then, slowly, as an idea formed, I said, “You say people can improve their executive thinking with two tools: Raise their altitude and own their businesses. I’m thinking those two things interconnect nicely. If I were thinking at a higher altitude, running my own business would come naturally. And, alternatively, if I were running my own business, it would be natural from me to think at a higher altitude. Those two things are like a reinforcing cycle!”

The event I delivered to Riz’s leaders went well. By the end of the day they were thinking very differently about altitude. To hear the tools I used with them, tune into this month’s episode of The Look & Sound of Leadership.