A senior leader feels a direct report is ready to lead her first offsite. With his coach, the manager examines tools a team leader can use to design offsites that can create meaningful change.

Jimmy was a division president I had coached. Over the years, he’d brought me in to facilitate offsite events with his team. Together we’d created many agendas and provided his group with a lot of different experiences. Now he felt it was time for Shanique, one of his direct reports, to conduct her first offsite. He was wondering how to support her.

He asked, “How should I help her think about leading an offsite?”

I said, “Let’s break it up into before, during and after. In the before portion, I always start with the most elementary, core question: ‘Why are you having an offsite in the first place?’”

“In fact, I’d ask you that question. Why do you want her to have an offsite in the first place?”

“I don’t know,” he said. “It just feels like time. She’s managing a team of twelve. I think she should get them all together and do something!”

“You know what it sounds like to me? It sounds like you think an offsite is a good tool for a leader to have, and you think she should start learning the tool.”

He nodded and gave a little shrug. “Yeah, I think that’s right.”

“And I think that’s nice,” I said. “Really, Jimmy, you’re giving her a gift. And that’s a fine reason for you to want her to have an offsite. Now she has to figure out why she wants to have one. The leader has to figure out why the offsite is happening. The question I find helpful is this: By the end of the day, or two days, or whatever, what do you want the team to know that they don’t know now, or be able to do that they can’t do now?”

“You’re figuring out the offsite’s return on investment,” he said.

“Right. What do you want to get out of it?” I said, “Here’s another way you could help her find her goals. Ask her to diagnose the team’s pain.”

“So that the offsite can fix where it hurts!” he said, with pleasure.

“Fix? Probably not. But make better? Absolutely,” I said. “What pain does she want the offsite to ease?”

“What are some good answers to that question?” he asked.

He nodded. “I remember doing a lot of clarification work, too. Clarifying roles. Clarifying goals.”

“Those are good goals, too!” I agreed.

“Sure,” I said. “Work on trust in the morning, work to clarify roles in the afternoon. Something like that, sure.”

“Are there bad goals I should be listening for?”

“I can think of one!” I said. “Don’t make the team learn something that’s really intended for just one person. I can’t tell you how many times a team leader has asked me to teach something like ‘communication skills,’ but,” – then in a furious whisper – “the real goal is to fix this one problem person!” I shook my head. “It never works.”

With a little grimace, he said, “I think I actually tried to do that years ago with this woman named Francoise. Ugh! You’re right. It did not work.” Then he shook it off and said, “So after I help Shanique find her goals, are we at the ‘during’ phase?”

I laughed. “Not yet! Once she nails down her goals, she gets to create the agenda.”

“How could I forget? I always loved doing that!” He stopped. “But she won’t be able to have an agenda anything like what you do with us.”

“Look, I refuse to take people offsite and then have them sit and watch PowerPoint. I want them doing things. You always had these cool exercises that got us up, doing things. That’s such a good way for people to learn. But I can’t do that stuff. I’m sure Shanique can’t. I’d like her to have an agenda with those kinds of exercises, but there’s no budget for a facilitator.”

“There are resources for her, Jimmy,” I said. “She can access a lot of the same exercises I use with teams.”

“Really? Will Shanique understand them? Are they written for civilians like us?”

Waking up his computer, he asked. “Are they online?” 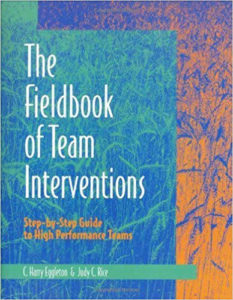 “Two are, one’s not,”  I said. “The one that’s not is my favorite. It’s my go-to book for all things team-related. It’s actually a three-ring binder. It’s probably 400 pages of exercises you can do with a team. It’s called The Fieldbook of Team Interventions. The lead author is Eggleton. It’s a like a treasure trove. I wouldn’t survive without it.”

I said, “The next one is online. I use the site a lot. It’s called Liberating Structures.  The activities there are so well designed. Sophisticated, but explained clearly. It’s all free. And there’s an app now, too. It’s a gift.”

“Got it,” he said, bookmarking the site.

I said, “Number three is completely different. It’s an archive of games. One-minute games. Ten-minute games. Things to wake people up. It’s online at thiagi.com.  Thiagi is the master of games. I’ve heard him talk. He’s hilarious. And his games are great. Just follow the directions and they work.”

“Could I do one of these games at a staff meeting?” he asked.

“Absolutely. Any time. Thiagi calls them jolts. You can give people a jolt any time.”

“Interesting idea,” he said. “So suppose the agenda is created, thanks to all these resources. Now what? Are we at ‘during’?”

“I think we are,” I said. “You’ve done a ton of these, Jimmy. How would you advise her about the ‘during’ phase.”

“Don’t get ruffled, but have opinions,” he shot back.

“Having an opinion’s easy,” he said. “At least for me. But not getting ruffled? That’s harder. There are times I want to shake them by the throat and say, ‘What are you talking about? That’s insane!’ But I sit there nodding my head, like I’m listening to a love song. Don’t get ruffled. It’s important.”

“If people are going to talk honestly, it is,” I agreed.

He went on, “It’s one of the nice things about having a facilitator. When you’re there, you can be the neutral guy and I get to be just another person trying to be honest.”

“I’ve seen you do that, Jimmy. And you know what I think you also do well? You wait. You’re really patient. You take your turn last a lot of the time.”

He smiled at me. “That’s been hard to learn. But if I go first, I never hear what people are really thinking.”

I asked, “What else would you tell Shanique to do in the ‘during’ phase?”

I laughed. “Well said! What else?”

“Well, this one she can’t do without you,” he said.

“Have an outsider’s view of the team. Try and see the team from as far away as you can. Having your perspective about the team I see day in and day out is very helpful. But Shanique is not going to get that this time.”

Then, suddenly changing gears, he said, “Okay, enough about ‘during,’ what about ‘after’?”

“Well, you’ve done great during the ‘after’ phases, Jimmy,” I said. “You know, some leaders are surprised that offsites generate work. They want to walk away from the offsite like a package that’s all boxed up. But if the offsite was productive, there’s supposed to be conversations to have, actions to take, changes to implement. You’ve always made time for those and made sure they have legs. With Shanique, make sure she does what you do.”

He shook his head. “I used to get so frustrated after my bosses’ offsites. We would go and do all this work, then it never got mentioned again. Except maybe at another offsite a year later. As if once-a-year makes a difference!”

“So what will you tell Shanique she should do after her offsite?”

“Be sure the action items are clear. Know who owns them. Make sure there are deadlines for them.”

“Excellent advice,” I said. “Something else I’ve noticed in your team in the ‘after’ phase – they adopt the language from the offsite. When words take on meaning, next time I come back, people are using those words. I assume you have a lot to do with that.”

“Actually not,” he said. “I think the team likes doing that.”

“You must be encouraging them. Or adopting it yourself.”

“That’s true. I do make sure to adopt the language.” He gave a little laugh. “Recently, this woman transferred into the team. She asked us if we knew we spoke a lot in code. I took it as a compliment. Made me realize how far we’ve come.”

Jimmy knew the value of offsites. He wanted Shanique to learn that a well-planned offsite helps a team move toward The Look & Sound of Leadership.