A leader’s boss has created a toxic environment. In conversation with his coach, the leader explores what factors he needs to nurture with his own team to assure they feel psychologically safe.

Made to feel stupid

Amit was telling me about an upcoming presentation.

His boss, Regina, a member of the senior leadership team had asked Amit to present the results of an initiative his team had been working on.

Amit was preparing to do battle.

“It’s bad enough how Regina treats us during her own staff meetings,” he said. “If she does something like that to me in front of the leadership team, it’s going to be the last straw.”

“What is it she does exactly?” I asked.

I asked, “Do people even participate? I’d think they’d be cowering.”

“They are. We are! But I can’t cower when I’m the presenter. I’ve got this bad feeling that she’s going to try to make herself look big in front of her peers by using me for target practice.”

“I don’t know. Do you have any tricks so I don’t lose it if she does a number on me?”

After a quick flip through my mental files, I asked, “Do you know the phrase ‘psychological safety’?”

“No, but I love it!” he said. “I’ve been trying to explain how I feel to my wife. She says it’s just nerves, but it’s not. I didn’t know it until you said it, but safety is the right word. Working with Regina doesn’t feel safe. That’s it exactly.”

I said, “Amit, Regina’s been your boss a while already, right?”

“So tell me. How have you been keeping yourself safe so far?”

“Imagine yourself at one of her staff meetings where she’s calling everyone stupid. What do you do when it’s your turn in the barrel?”

“It’s tough!” he said. “I keep telling myself two things all the time. One is that we’re all in this together. I am not alone in that room.”

“So Regina isn’t just doing this to you?” I asked.

“Oh, no! She does not discriminate. We’re all targets. Remembering that helps me not take it personally. Look, when it’s my turn for a beating, it feels awful. But I know it’s not about me. I try not to take any of her behavior personally, as hard as that is!”

“The other thing is something I tell myself at night. Sometimes a particular exchange will play over and over in my head. And I remind myself, I am not a victim here. I have a lot of choice – including the choice to not be in that room. I could quit. I could do a lot of things. Remembering that I have choice calms me down.”

I said, “Those are two great self-talk messages, Amit. You are not alone, and you are not a victim. I couldn’t coach you any better.”

“You know what’s empowering? I’m documenting everything. I will not be surprised the day her behavior turns into an investigation. And I’ll have it all in writing. Making that choice helps, too.”

He asked, “Is that psychological safety phrase something I should be thinking about with my own team? I’d hate to treat them the way Regina treats us,” he said.

“I doubt you’re in danger of that, Amit,” I said, “but sure, actively trying to create an environment that’s psychologically safe is a great way to lead.”

“So what should I know?” he asked.

I thought a second, then said, “The person who coined the term ‘psychological safety’ is Amy Edmondson. She’s at Harvard Business School now. As a young researcher, she was interested in what made some teams high performing. She started observing teams in hospitals because it’s easy to find the high performing teams. She chose to measure the number of human errors a team makes in medication errors. What she found was that the teams who were highest in psychological safety also made the most errors.”

“That’s not where I thought this was going!” he said in surprise.

“Neither did she! So she kept up her research, and what she found was that the teams with the highest psychological safety weren’t necessarily making more mistakes than other teams, they were just talking about them more. Openly admitting mistakes and searching for better results was a core part of what those teams did everyday. And they did it without blame. Openness was rewarded. Everyone had a voice. So the errors were front and center.”

“That sounds like a book some surgeon wrote, about how everyone in the operating room has to speak, even the first year resident.”

“Oh! The Checklist Manifesto, That’s a great book, isn’t it?” I asked. “The author’s name is Atul Gawande. I love him. And yes, that’s a perfect example of how Edmondson’s psychological safety creates high performance.”

“So what should I do with my team?” he asked.

“Well, Edmondson’s model has an ‘x’ and ‘y’ axis. Each axis can be either high or low. Along the bottom is ‘accountability’. Up the side is ‘psychological safety’.”

I shared my screen and showed him the High Performing Teams Diagram: 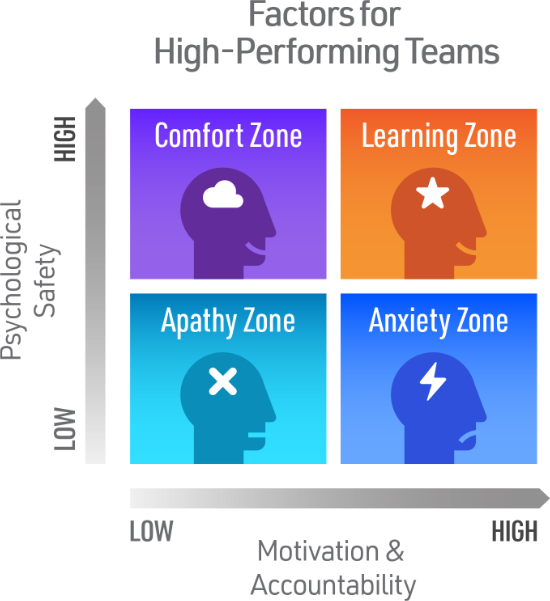 “Regina’s right down there in the Anxiety Zone!” he said. “But you want your team up in the Learning Zone, right?”

“Right,” I said. “Teams in the Learning Zone strive to get better, not to assign blame.”

“But wait a second,” he said. “If my team feels safe enough with me to tell me when they’ve screwed up, how can I hold them accountable? Isn’t that like hitting a guy when he’s down?”

“Why would accountability end safety?” I asked.

“Because a lot of the time, when you tell someone they’re not hitting the mark, they get pissed off. Or their feelings get hurt. That doesn’t sound like safety. That sounds like Regina!”

I thought for a second, then said, “I imagine accountability differently. I imagine that we all agree we’re working towards the same goal. If we’re all contributing to one score on the scoreboard, then I want you to hold me accountable. It’s like I’m a player and you’re the coach. Your feedback is going to make me better and I’m going to see that as helpful because we all want to win the title. I can’t be my best without feedback.”

“I like the idea of coaching,” he said. “I used to coach Little League, and I always used to ask the kids, ‘How do you think that went?’ ‘What do you think we could do better?’”

“And did they have ideas?” I asked.

He laughed. “Are you kidding? They had a million ideas. Getting them to speak up was not the problem!”

“It sounds like you made it safe for them, Amit” I said. “See? You already know a lot about creating safety.”

He wondered, “Would those questions work with adults?”

“Why not? ’How do you think that went?’ and ‘What do you think we could do differently?’ Those are great questions for the kind of reflection that creates safety,” I said.

Then, with a little groan, he said, “You know what this means, don’t you?”

“If we’re reflecting honestly, I’m going to be on the chopping block myself sometimes. If we’re really going to think about how to do things differently, my actions have to be on the table, like that surgeon’s in that checklist book.”

“Hard? Maybe not. Is it my natural instinct? No!” He laughed.

“Amit, you asked how you can create safety for your team. You’ve hit on two behaviors Edmonson specifically calls out as effective. One is fallibility. She says leaders who want to create safety have to be willing to admit their mistakes. Number two is inviting feedback. They have to engage in genuine conversations that ask questions like ‘How do you think that went?’ and ‘How could this be better?’”

“So tell me something. Would it be fair to say that, to create safety, a boss has to be a good listener?”

“That’s certainly part of it, yes,” I agreed.

“That’s been on my mind lately,” he said. “There’ve been a lot of articles in my feed saying that, because of working remotely, bosses have to do a better job connecting with their people. We should ask people how they’re doing. Listen to them talk about their personal lives. I have to admit, I’m shy about it, Tom. For years I was told not to have personal conversations with my direct reports. And I didn’t. Now, suddenly, I’m supposed to just flip and talk personally?”

“What’s your concern?” I asked.

“Well, I just don’t think I’m very good at those sorts of personal conversations. Is that something we could talk about in the coaching?”

I told him I’d be happy to. That coaching conversation, about making personal connections, is next month’s The Look & Sound of Leadership.

The Checklist Manifesto
by Atul Gawande 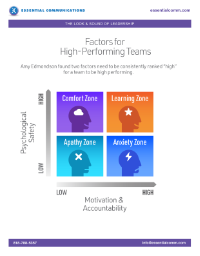