A team leader is tired of kerfuffles. In conversation with her coach, she learns to use a simple chart that generates almost miraculous results.

Dalita didn’t like kerfuffles. She felt her emotions deeply but contained them tightly. Her happiest moments and her biggest upsets appeared almost the same. Containing her emotions exhausted Dalita. She could feel the kerfuffles grinding on her spirit.

The major goal she wanted from the coaching was to get her team under control. Stopping the kerfuffles would be one large part of that bigger goal.

She told me she’d inherited this team early in the pandemic. Most of them had worked together for years. She didn’t like that even now, years later, she still had not met even one of them in person yet. She longed to be with her team.

I asked her to describe a kerfuffle.

“It doesn’t happen during the team calls. But afterwards, in the chat, suddenly there are protests about this and accusations about that.”

“Stupid stuff. All the stuff I hate. Territory. You know, if I ran the world, I’d say, ‘Look, we all have the same client. Whatever we can do to serve them, that’s what we should do. Everything else is a waste of time. So stop all this nonsense.’ That’d be me.”

“Have they heard that from you?” I asked.

I asked, “Are they angry with each other? I mean, do they actively not like each other?”

“And this all changed when you arrived?”

She laughed. “Are you asking, did I trigger all the drama? I wondered the same thing. But no, they tell me it’s not. They tell me it’d actually been going on a while and then the pandemic just made it worse.”

I asked, “Do you get a sense that they like all this squabbling? Or would they like it to stop, too?”

“People are not happy. I can see it. I think they’d like it to stop, too,“ she said.

I paused, then said, “Can I throw an idea up here? I have no idea if it’ll address your team’s needs, but there’s a tool that might be helpful. Can I tell you about it?”

She bounced a little in her seat. “Well, with a buildup like that, now you have to tell me!”

I laughed. “Good tease, huh? OK. The exercise is centered on a chart. There are rows going across and columns going down. In the rows going across, you list the team’s tasks. Any task you deem as ‘significant’ gets listed on a row.”

She held up a finger to stop me and asked, “Would a task be like the whole deliverable? Or would it be all the milestones along the way?”

I shrugged. “Whatever you think qualifies as ‘significant.’ If a milestone has been causing squabbling, that’d make it significant, I think. So in that case, yes, you’d list it on a row.” 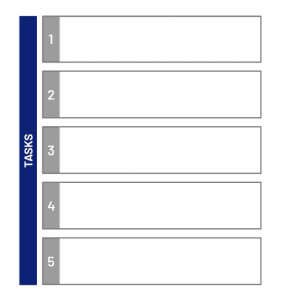 “And we’re going to list every single solitary task the team does?” she said, sounding a bit aghast.

I nodded. “The significant ones, yes.”

Quickly recognizing the value, she said, “That thought exercise alone might be pretty interesting. ‘What are the team’s most significant tasks?’ Okay! Am I building this list on my own, then presenting it to the team?”

“You could. But involving the team will really get them onboard with the process.”

“Okay, so engage them in identifying significant tasks. That’s the ‘y’ axis. What’s the ‘x’? Time?”

“No. People. Anyone who contributes to the task has a column going across. And now things get fun! Now we get…” I took a breath and said dramatically, “The Code!”

She laughed and asked, “Are we filling in blanks?”

“Exactly. There are seven responsibilities that might belong to a task. Every responsibility has its own symbol.”

“A code is born!” she laughed.

“Indeed. But in this code there is one symbol that stands above all the others. It is ‘The Big R.’”

“Which stands for what?” she asked.

“The Big R indicates who has the primary responsibility for the task. And in Responsibility Charting, each task can only have one Big R. So you have to decide who ultimately has  responsibility.”

She gave an excited bark of a laugh. “Ha! That alone might be worth the price of admission!”

She went on, clearly enjoying herself, saying, “I can imagine some tasks sit there like orphans. No one wants to claim the Big R. But I bet other tasks have people clamoring to be the Big R.”

I nodded and smiled. “I can imagine that, absolutely.”

“No, you’re right. There’s more. But if you only did the Big R, it’d add value. Sometimes, untangling the Big R opens up everything below it.”

“That would be sweet,” she said. “So what else is there?”

“No,” I smiled. “Anybody who participates in the task gets a little R. Lots of people will have little Rs. Then there’s another symbol that indicates ‘Must Approve.’ That can be really helpful to clarify.”

She smiled. “Helpful? I should say so. It’d stop all this bickering. Let’s just figure things out, people.”

I made three grouping gestures, left to right, across my screen, saying, “The seven responsibilities fall into three buckets: Before, During and After. It’s a really simple breakdown.”

“Now we’re back with the tasks, right?” she asked.

“Yes. Tasks get broken down as Before, During and After. But that’s all The Code. Now comes the magic.”

“Once I know The Code, I only fill in boxes where the responsibility belongs to me. I don’t assign anything to anyone else. I have to identify what I think is mine. And if it’s not mine, I have to leave it blank. That square belongs to someone else.”

“Oh my goodness, Tom, if people really did that – kept their nose out of what’s not theirs – there would be no squabbling, I promise you.”

“I do,” she said. Then she asked, “I could have more than one symbol in my box, right?”

I smiled and shrugged. “As long as everyone agrees, you can do anything you want. Make the chart work for you. There is no ‘right.’ The chart is just a framework for having a conversation about how the work gets done and who has the ball when.”

She said, “When everyone shares their charts with each other, I’d like us all to be together in person.”

“Because it’s such an important conversation. I will be interested to see if they are equipped to have this conversation. But either way, it’d be harder to do online.”

“I’m glad you’re looking forward to the conversation,” I said.

“I am,” she said. “It’s going to give me a lot of answers. Plus a lot of those boxes are going to belong to me. One thing this chart will show is how much of this work I think I own. But maybe I don’t have to. This could be really helpful.”

I could see she had a thought. I watched.

She said, “I hope they won’t see this as a competition over boxes. I don’t think they will, but I hope they see that the work, the task, is more important than any one box.”

I said, “If that’s the message you give, that you want clarity, too, that this is not about any one person or any one task, I think they’ll like it a lot. That’s been my experience with teams.”

It was her experience, too. While Responsibility Charting was not a cure-all – it sadly did not magically ‘get her team under control’ – it did stop the kerfuffles, which pushed the team much closer to The Look & Sound of Leadership.