A team agrees: their weekly staff meetings are inefficient and a waste of everyone’s time. The team leader and his coach discuss ways to make all team meetings robust and valuable.

Sirhan’s global management team was relatively new. Since forming just over a year ago, they’d come together three times. I’d facilitated each of the events. Sirhan and I agreed that the team was made up of whip-smart individuals who weren’t yet working together as a leadership team.

Recently I’d gathered feedback from the team about itself. A major issue came up repeatedly: the inefficiencies of the weekly meetings.

Now, in our coaching session, Sirhan said, “I’m willing to do things differently if you’ve got any ideas, Tom.”

“When it comes to improving meetings, I use ideas from Patrick Lencioni,” I said.

I knew Sirhan would recognize the name. During the team events we’d done together, I’d used a few tools from Lencioni’s enormously popular The Five Dysfunctions of a Team. Sirhan had liked them. Now I said, “Lencioni wrote a book about meetings, too.”

“Makes sense. Meetings are a big part of what teams do, right? So what’s the book called?”

“Can you teach it to me?” he asked. Sirhan loved this stuff.

“Sure, it’s pretty simple. He talks about four different meetings. Each has a different frequency and a different function.” I sketched. 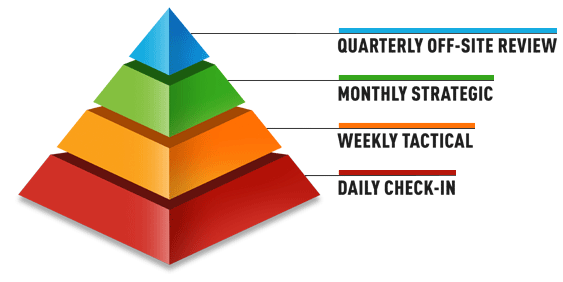 Looking at my sketch he said, “There’s no way we could do a daily check-in. Not spread all across the globe.”

Showing my palms in surrender, I said, “I’m just explaining, not advocating.”

“Sorry!” He flopped back to listen.

“Lencioni says people do better when they know why the meeting is happening.”

“Not rocket science,” he commented.

“Agreed. Common sense. The problem is, a lot of the time, people really don’t know why the meeting is happening. Or what they are supposed to do once the meeting starts.”

“You mean, like are we making decisions or brainstorming?”

He gave little shrug. “I could probably do better about that.”

“I start our meetings with status updates. But I’m always rushing through them because there are serious decisions we need to make. I get impatient because the updates feel like they take forever and I want to get to the decision making. I’ve often wondered if I could dump one or the other.”

“Oh. Interesting. Lencioni’s idea is to separate those two things. Split them up and they both get faster. The updates become the Daily Check-In meeting. It’s only meant to be five, maybe ten, minutes long.”

He explained. “They were great. No one sat. A quick sentence or two all around the room. It made you think ahead. It made you listen up. You had to be pretty sharp to do it. And we were a sharp group.”

There was joy in his memory. Pointing at the next level up in my sketch, said, “The Weekly Tactical meeting. This is a staff meeting, yes? Short-term work. This launch date, that project. Am I right?”

“You are absolutely right.”

“So these first two meetings both focus on the short-term.”

“Right. But for the weekly meetings, Lencioni takes your typical staff meeting and drops a bomb in it. And, before I make my case to the jury, Your Honor, I have to admit my bias: if people can handle it, I think this next idea is great.”

“The idea is that Weekly Tactical Meetings operate without agendas.”

He gave a grunt as if I’d socked him. “That sounds like a version of hell!”

“Most teams I know would spend the whole meeting arguing about what to talk about.”

“What would the arguments be?”

“Whose project should get talked about. Who gets the time and the attention. I don’t think my team knows yet where their own work stops and where the larger work of the team begins.”

“That’s an interesting way to put it.”

He narrowed his eyes at me. “This really sits with me, doesn’t it?”

I cocked my head questioningly.

He went on. “If they don’t know why one issue is more important than another, that’s on me for not giving them the scorecard.” Another grunt. “Maybe they really don’t know why they are meeting.”

Tapping my sketch, he said, “This would really stretch them. They would have to decide the agenda and then get the agenda done, right? All in the same meeting.”

He nodded, thinking. Then, moving to a new idea, “So far we’ve only talked about short-term work. So all the stuff with bigger implications, the long-term stuff, that’s done in the monthly and quarterly meetings?”

He nodded, seeing the model’s value. “If I knew for certain we were really going to address long-term issues once a month, I might be willing to keep the weekly meetings focused on the short-term.”

I was silent as he thought.

He continued. “How many topics get covered in the monthly meetings? Not many, right?”

“That actually sounds good to me. I like working at that level.”

“Lencioni suggests that senior leaders will be attracted to this level of work.”

“I think of it like crow’s nests stacked one on top of another. Every time you go up to the next one, the horizon gets farther away. So you have to get as high as you can and be really thoughtful to be sure you pick the right point on the compass. That’s what I’m good at.”

He doodled a second, then he asked me, “How long are those monthly meetings?”

“A couple of hours,” I answered.

“Then you might need multiple monthly meetings,” he said.

“My team certainly has more than one or two issues to decide each month. But, no, it’d be okay. The meetings wouldn’t have to become standing meetings. They’d get scheduled as needed.”

“I hadn’t thought of that, but I think you’re right,” I said.

Eyeing me with doubt, he said, “You know, if we did some version of this, it would result in more meetings.”

I resisted my impulse to defend the model.

Warming to the idea, he continued, “But the meetings themselves would be so much better.”

“I just think they’d be more interesting. Certainly it’d be clear why we were coming together. That’s a problem I didn’t even know I had.”

I nodded in agreement. “Lencioni says meetings aren’t interesting because they have no drama.”

“Drama I can do without, thank you very much.”

“He doesn’t mean personal drama. He’s talking about the kind of drama that holds people’s attention. Like in the theatre or the movies.” I smiled conspiratorially. “And you know what all drama is based on, don’t you?”

“That is definitely not what I want in my meetings.”

“Are you sure?” I asked. “Conflict doesn’t mean bad behavior. It means people are willing to wrestle with important issues that have high stakes. High-performing team members learn that it’s okay to fight for what you want. And, when your issue loses, you let it go.”

Smiling, he said, “This makes me think of when I was still pretty young back in Michigan. I was on a team of great debaters. They’d throw out all kinds of ideas. No one seemed to take any of it too personally, but at one point, I did. I offered to resign from the team because I felt I’d let everyone down. And they were like, ‘Are you crazy? It’s just work. Roll up your sleeves and get back in here.’ I had to learn to let things go. It was a hard lesson. But a good one.”

“You know what we haven’t talked about yet?” he asked. “The Quarterly Off-Site Review. That’s where real high-level thinking happens, right?”

“Yes,” I said, then laughed, saying, “If you adopt this model, the team is going to do a lot of development on their own in every meeting!”

He laughed. “Just learning to do a huddle is hard. I know!” Then he laughed again. “Watching them try to decide an agenda. That will be drama! And fighting for what they want. And letting things go. Yes, this should add a lot of interest to our meetings!”

The geography of Sirhan’s global team did not allow him to do the Daily Check-In the way Lencioni envisioned. And he found flexibility in the way he used the Monthly Strategic meetings. I heartily supported Sirhan adapting the model to match his team’s needs.

At first, the team members were cautious about this new method. Some were openly resistant. But he involved them in reshaping the model. As they engaged in making their meetings productive, they began to coalesce as a team. Over many months, they found they gained skills that allowed their meetings to display The Look & Sound of Leadership.