The Power of PowerPoint

“Death by PowerPoint” is an all-too-familiar experience. Break that cycle with the eight tips in this episode to create slides that will engage your listeners and illuminate your content.

The Power of PowerPoint

The mixed blessing of PowerPoint

Toward the middle of our coaching engagement, Adrienne earned the rare opportunity to present her group’s achievements to the CEO’s staff meeting. She was understandably nervous and wanted my help polishing her style.

I brought my video feedback gear to our session but we didn’t end up using it; the moment she showed me her slides I felt we had more important work to do.

PowerPoint is just a piece of software; intrinsically it is neither good nor bad. But too often it blurs, rather than clarifies, our messages and prompts behaviors we would never otherwise display.

What follows are eight tips for using PowerPoint more effectively. Each tip comes with this caveat: if your culture has a different standard, don’t use my suggestion; stay within your company’s norm.

PowerPoint is a visual medium. At it’s most effective it gives us a visual picture of how groups of information relate to each other. It was not intended to generate pages of a book to be read.

Use PowerPoint to create a visual palette we can follow. For example, give each element (the initiative itself plus the three milestones) its own color. Then keep the colors consistent throughout your presentation.

If the call center expansion gets a yellow box when first introduced, as in the illustration below, every subsequent slide about the expansion should be “branded” with yellow—perhaps a yellow banner across the top with the words, “Call Center Expansion.”

Or perhaps every slide has three tabs, one tab for each milestone in its own color. When you’re showing slides about the call center expansion, only the call center tab is in color; the others are grayed out. Again, this is shown in the illustration below.

Creating the initial visual theme isn’t too difficult. But being consistent requires discipline. If you do it, the resulting visual roadmap is a great use of PowerPoint’s strengths. This is the visual equivalent of the “Sorting & Labeling” tool I discussed in an earlier Executive Coaching Tip. 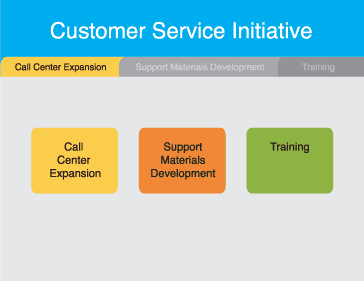 At one point, when Adrienne advanced her slide, my head jerked back as if someone had taken a swing at me. What made me flinch was a slide that had so much content crammed into it that it felt like a visual assault.

If you print out your slide deck and distribute it to everyone in the room, the idea of readable slides isn’t so important: people can decipher 8-point font on a piece of paper they’re holding. But if you project your slides, make sure they’re readable from a distance.

Here’s the easiest test. After you’ve created a slide, get out of your chair, take three steps back and look at the slide from a distance.

If you can still read the text, great, your slide will be readable on the screen. But if any of the text looks like a line of black centipedes crawling across the screen, your audience is never going to be able to decipher it. You’re not doing yourself any favors jamming your content onto the slide. I often joke, “Hey, split your content onto another slide—it’s free!”

From slide to slide, be visually consistent. If the headline on your first slide is in Title Case, every subsequent headline should be in Title Case. Don’t suddenly switch to Sentence case.

Or, if you have one chart where the labels are 36-point font, every label on every chart should be 36-point. If a later chart will only accommodate 28-point font, then all the charts, from start to finish, should have 28-point font.

I wanted Adrienne to shine when she was in front of the CEO and his staff. I wanted them to focus on her, not her slides.

One major argument I have against PowerPoint is that all too often it takes the focus away from you and puts it on a lifeless tool that’s supposed to be a visual aid. PowerPoint should no more be the focus of a presentation than an extra should be featured over the star of a movie.

Bullet points allow your audience to scan the words and tune into you as soon as possible. Grammatically correct English sentences require your listeners to stop and read. Eliminate as many words as you can while still being accurate.

5 Reflect the Words on the Screen Without Reading

Obviously you won’t speak in bullet points; you’ll speak in grammatically correct sentences. But you should speak key words from your bullet points.

Speaking some of the same words as your bullet points help us know where you are. Should you read your slides? Absolutely not. Unless there’s a quotation on the screen that must be spoken accurately, I hope you will never read your slides to us. Ever.

However, speaking key words from the bullet points helps us stay oriented and allows us to follow the points you’re making.

6 Talk to Us, Not the Screen

If you weren’t using PowerPoint, would you ever turn your back on us while you’re talking? Of course not. Why would you do this just because you’re projecting images onto a screen? Keep your eyes on us when you’re talking.

7 Introduce Each Slide in Silence

Imagine watching a presenter. As she explains an interesting idea, she advances her slide. A new image hits the screen. Where do your eyes go? To the screen, right?

And what do you next? Most likely you begin to read the new slide, right? It doesn’t matter that she was explaining an interesting idea. You automatically shift from listening to reading.

Here’s the problem. Our brains don’t multi-task; they only do one thing at a time. So if you’re reading her slide, you’re not physiologically able to listen to her.

By it’s very nature, PowerPoint repeatedly puts presenters in situations where they are speaking but the audience is unable to listen to them. This is PowerPoint at its worst.

I suggest that every time you hit “advance,” pause. Your audience can’t listen to you anyway! Take a moment to scan your content. Get your thoughts together. Then begin speaking.

After that brief pause, your listeners will have captured the major messages on your slide and will be able to shift their brains from reading mode back to listening mode.

This slower style projects a sense of confidence and composure that feels very mature.

One complaint I have about PowerPoint is that it diminishes us as presenters. Screens are at the center of the room; we get pushed off to the side. Lighting often gets dimmed, accentuating the screen while we get left in shadows.

We need to stop being pushed aside by PowerPoint and step back into the center of the room where we belong so we can create dynamic connections with our listeners. But how can we do that when the screen is blazing with thousands of lumens and we’re forced off to the side?

I certainly don’t advocate stepping into the projected image. Avoid that at all costs unless you enjoy looking like you’ve been transported back to a 1970’s discotheque.

I do advocate using the “B” key.

In Slide Show mode, when you touch the “B” key on your computer, PowerPoint will go black. At that point you can step in front of the now-blackened screen and into the center of the room where you belong.

“B” is a wonderful visual relief when a slide is going to be up for three or six or ten minutes at a time. No image is so compelling that it should statically burn on the screen behind you for endless minutes.

Bring your slide back by touching “B” again. Or simply hit “advance” and the next slide will come up, overriding the “B” function. By the way, if you hit the “W” key, you’ll get a blank white screen. Just right for those boardroom moments that call for hand shadows or stick puppetry!

After working on these tips and others, Adrienne rebuilt her entire slide deck. She rehearsed transitioning in silence from one slide to the next—a behavior she found particularly challenging. Her boss was in the room when she presented to the CEO. The feedback she got was that she had definitely displayed The Look & Sound of Leadership™.