A disruptive leader is viewed by his superiors as perhaps uncoachable. But his coach actually finds him rather engaging. The coach shares a tool specifically designed to help reduce people’s blind spots

Martin was described to me as clueless yet gifted. In my mind, he fell in the category of leaders too talented to lose but too troublesome to keep.

Because his expertise was unique, Martin had been with the company a long time. Complaints about him stretched back years. Any people reporting to him directly had been taken away long ago, but still he created disturbances. Most recently, a young female technician had filed a complaint against him.

The head of HR had facilitated a meeting between Martin and the tech to discuss her complaint. Martin, who had talked more than listened throughout the meeting, repeatedly told the young woman all the reasons she was wrong. The HR leader was discouraged.

Soon after, knowing I had coached disruptive executives for years, she called. After telling me the story, she asked if I thought Martin might be coachable. I had no idea. I proposed allowing me three coaching conversations with Martin, after which we’d stop and assess.

Some leaders, when told they’re getting a coach, like it or not, approach the coaching as just one more piece of discipline. Not Martin, as far as I could tell.

When he and I met on Zoom for our first conversation, he was eager to tell me his version of the story. And maybe, he said, just maybe I’d be able to explain to him what this problem was that seemed to make people upset with him all the time. He wanted me to know he was actually a really nice guy. And I agreed. He seemed nice to me.

I asked if he would describe to me this “problem” he thought was following him around. He talked a while but didn’t articulate any specifics. I asked what message he’d heard from the tech and HR leader during their meeting. He was vague, talking only about them, not at all about himself.

I observed, “Do you know what’s curious to me, listening to this, Martin? It’s curious that you know a problem has been following you around, but you can’t quite explain it. You’re a smart guy! Is it at all odd to you that this problem, this thing causing disruption in your life, is lurking in the shadows like some monster in a movie?”

I was learning that talking in straight lines was not Martin’s style. It was many moments later that he answered my question. Yes, he told me, not knowing was odd. “Must be some weird gap in my brain,” he laughed.

He rolled his eyes. “That whole blind spot idea doesn’t make any sense, if you think about it. If you have a blind spot, the only place it could ever exist is inside your blind spot! Am I right? So how can anyone ever know if they have one?”

“Yes,” I agreed. “That’s such an interesting problem, isn’t it? Which is why psychologists have been designing tools to help people reduce their blind spots for a long time. The tool I like most for shining light on a blind spot is from the 1950’s. Can I teach it to you?”

I said, “Imagine every person on the planet is walking around inside a teeny tiny house. The way they see out into the world is through a big window. Everyone is looking at everyone else through their own window. And everyone else sees us framed inside our own windows. Now, these windows that everyone has have a name. They’re called The Johari Window.”

“Does the idea come from India?” he asked.

“No,” I smiled. “I thought the same thing. But it was created here in America in the 50’s by two psychologists – Joseph Luft and Harry Ingham. They combined their first names and came up with Johari.”

I continued, “Everyone’s Johari Window has two purposes. The first purpose is to reflect ourselves back to ourselves. It’s a mirror. The second purpose is to be seen by others.”

“Not sure I like that sound of that, but okay,” he said.

“For everyone to see?” he asked.

Known and Unknown to Others

“On which pane of the window we’re talking about.” He drew breath to ask another question but I raised a ‘hold on’ finger. I continued, “We’re going to put dividers across the window, side to side, and top to bottom. So, one divider splits the window into upper and lower halves; the other divider give us left and right halves, and we end up with four panes.”

He softened his gaze, imagining.

“Sounds a little creepy,” he said. 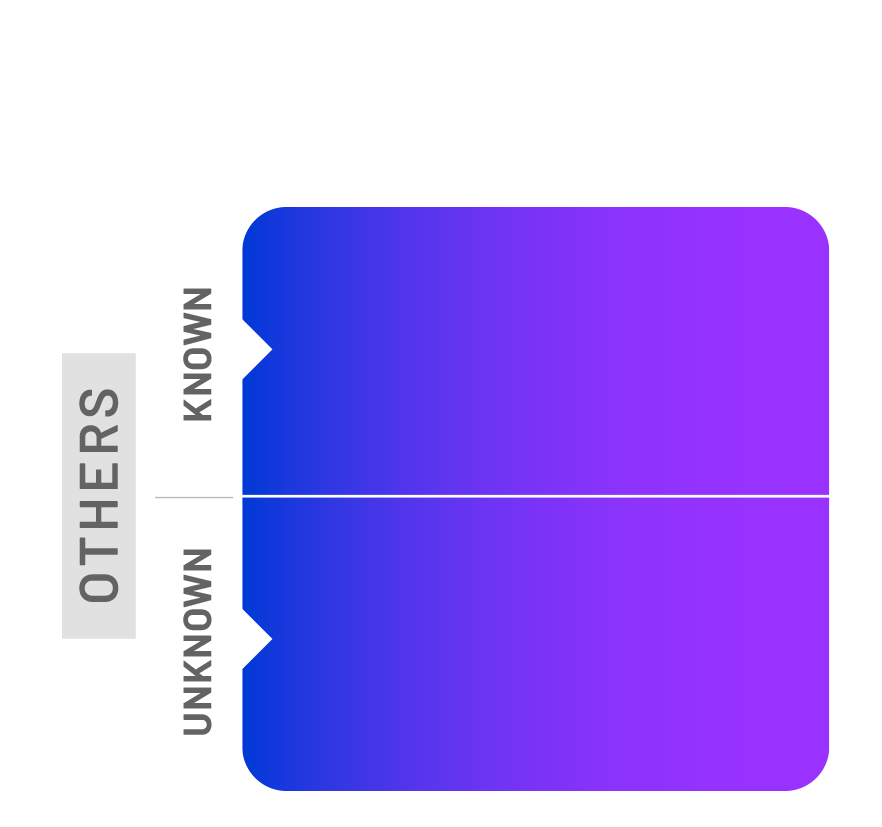 “What kind of information are we talking about?” he asked.

“Could be anything. How you like your coffee, for example. I’m guessing some people know that about you, but I don’t. So for me, right now, that information is hidden from me. It’s in the bottom half of the window, but for others it might be in the top half.”

“Could be. It could also be your behavior at work. Some people know that. Some don’t. Could be your spiritual beliefs. Or how you’re feeling today. People might or might not know any part of you.”

Known and Unknown to Self

“The right half is unknown to you. That’s the blind spot, yes,” I agreed.

“Again, could be any number of things. You know what I see a lot? Some people are really articulate about their feelings. All that emotional information is known to them, so it lives in the left half of their windows. The left is information people do know about themselves. It’s called Known to Self. But I meet other people who don’t know their feelings well at all. They can’t distinguish between being satisfied and being thrilled. Between disappointment and despair. That kind of information – that they don’t know about themselves – goes in the right half. It’s called Unknown to Self.” 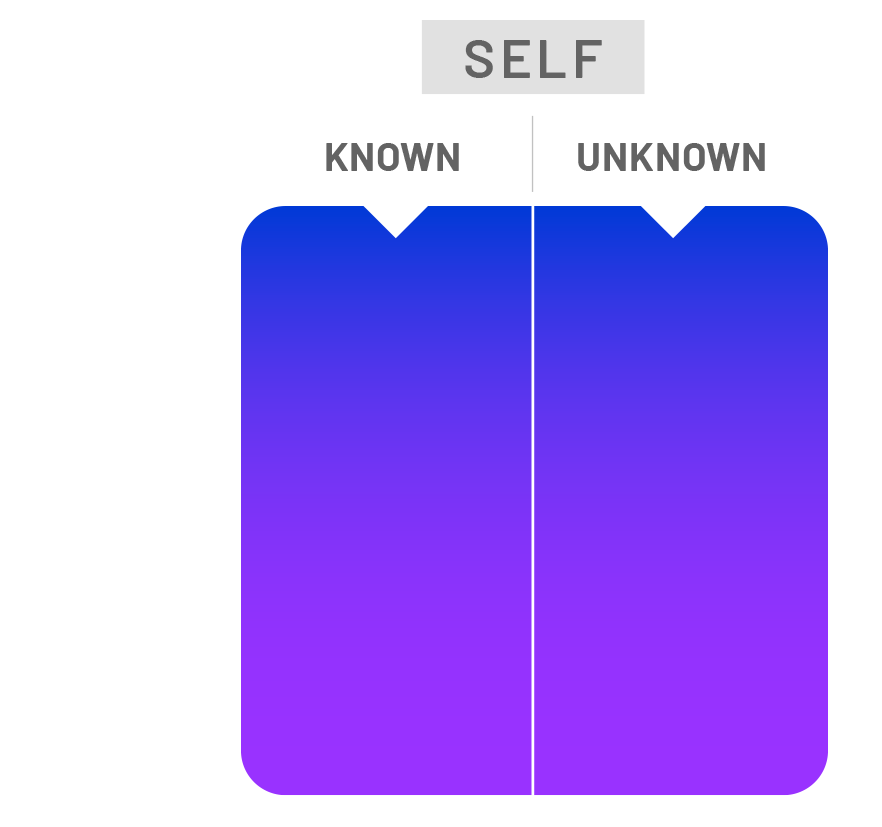 “So if I had a blind spot it would be on the top right, right?”

I was impressed he could visualize the whole model on first hearing. “Right!”

“Do the four panes have names?”

“So what’s the blind spot one called?” he asked.

I smiled at him. “Blind Spot. It’s called Blind Spot.”

“What’re the others?” he asked.

“OK. The upper right is Blind Spot: known to others but not to you. Then, bottom right, is unknown to you and to everyone else. That is called the Unknown Area.”

“What’s in that square?” he asked. 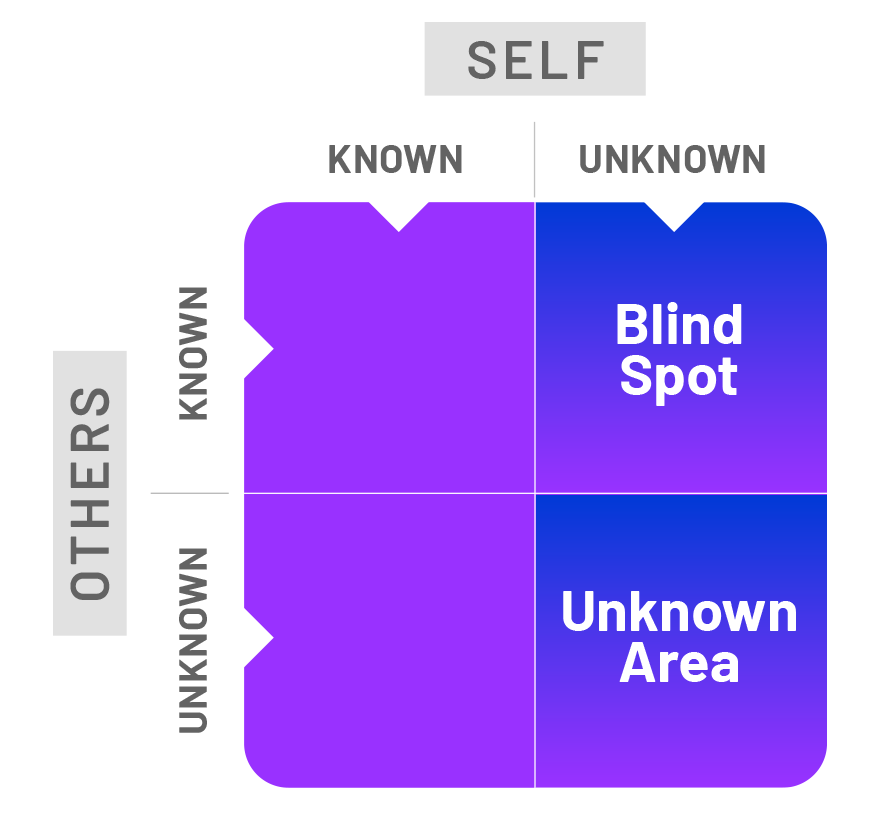 “Could be part of your personality that operates unconsciously. Or it could be a strength that’s just emerging: the person doesn’t recognize it about himself and neither does anyone else yet.”

“I didn’t expect anything good in the Unknown Area,” he said.

“Well, it just seems anything about yourself that you don’t know could be used against you.”

“That’s an interesting thought,” I said. I appreciated Martin’s uncensored sharing. I was also willing to consider that that very quality might be contributing to his problem.

“What are the other two names?” he asked quickly.

“So far we have Blind Spot and Unknown Area on the right, top and bottom. Then, on the bottom left we have the Hidden Area. Things you know about yourself but other people don’t know. And upper left are things that are known to you and to everyone else. Upper left is called the Open Area. The Johari model says the goal should always be to expand the Open Area as much as possible.” 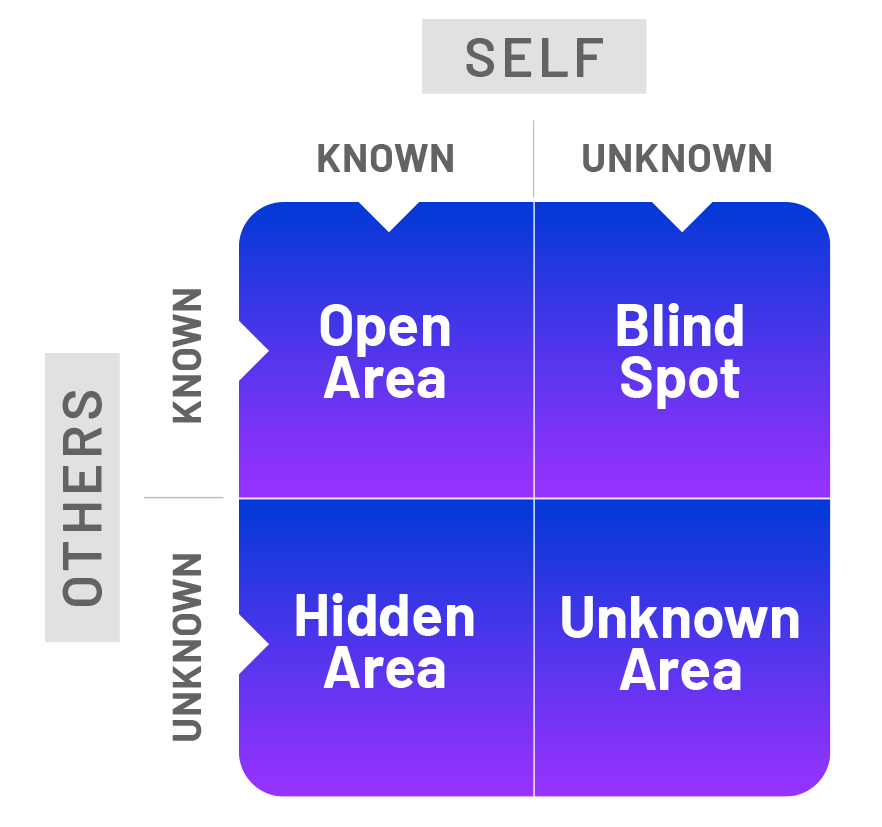 “Wait!” he said. “Are these dividers like sliders? Can the panes change size? I wasn’t picturing that.”

“They can! That’s why the Johari Window can be so powerful. It gives you agency over how big or small your four panes are. When I use this with teams, we talk about information people can move from the Hidden Area to the Open Area. If people can make their Open Areas bigger, it’s better for the team.”

“If you share things you know it’s better for the team.”

I said, “Maybe information from a report. Maybe your motivation behind a decision. Goals for a project. Ideas you haven’t shared yet. It’s always better for a team when things like that are shared.”

“But I don’t want people to know everything about me,” he said. 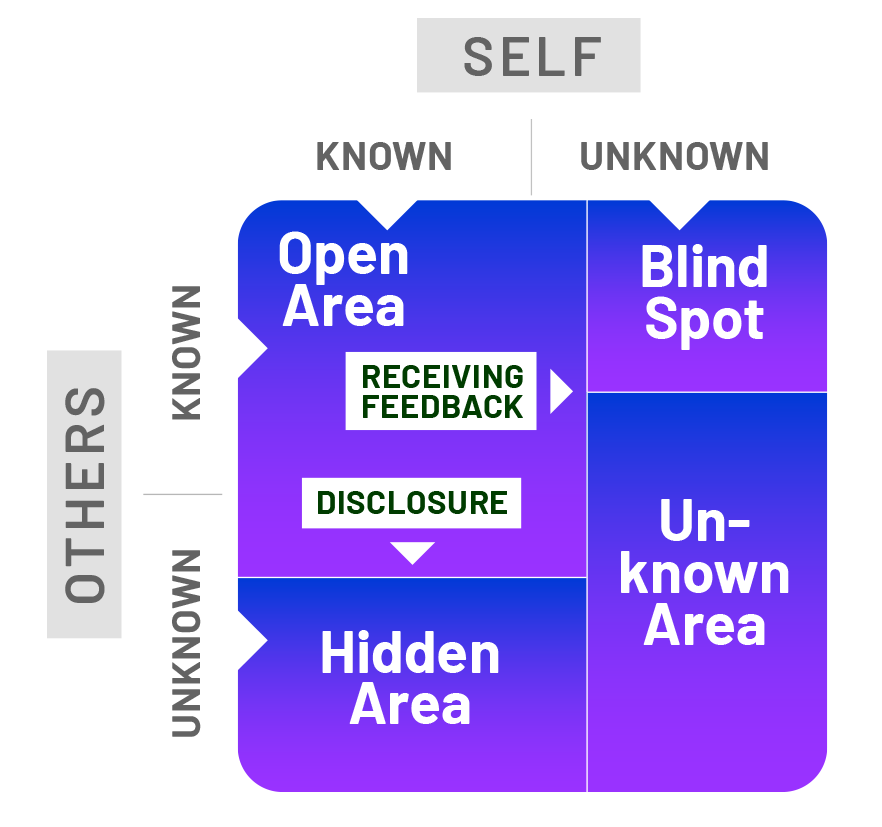 “Who does?” I agreed. Again, I was grateful for his unfiltered thoughts. “I think it’s important for our health to know we can choose to keep certain thoughts and feelings private. It’s why the Hidden Area exists in the first place.”

Proud of himself, as if he’d foiled an attempt to trick him, he said, “So according to this Johari Window, you’re saying this problem of mine is known to everyone else but not to me. It’s my blind spot. But that’s why you’re here, right? You’re going to shrink my blind spot.”

“How’s that going to happen?” he asked.

“I’d like to start with hearing some feedback,” I said. “My understanding is that you’ve been getting feedback but isn’t very clear yet. Right now I think your feedback is in your Blind Spot area. I’d like to give you some tools so maybe you could move it to the Open Area.”

That next part of my coaching conversation with Martin, about receiving feedback, is next month’s installment of The Look & Sound of Leadership. 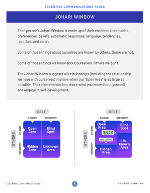