A former client reaches out to her coach, seeking his help in deciphering a 360-degree feedback report she received. Their coaching conversation covers the ways 360s help and hurt.

Jenna had been my coaching client two years earlier. We’d enjoyed each other immensely and done meaningful work. She told people proudly that the coaching had helped her land her current role.

Now, the global non-profit where she worked was rolling out a new 360-degree feedback instrument. She’d been in the pilot cohort and had received her feedback report. She got in touch with me to sort through some questions. 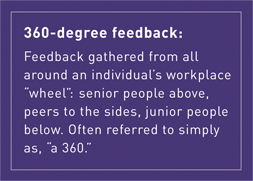 “One of my direct reports is this guy named Alex,” she told me. “I’d like to get him a 360. Do you think I have to use this one?” She picked up her current report and gave it a little flap.

“Not for Alex. Maybe not for anyone. You saw the PDF I sent you. It’s too much data for anybody to absorb!”

Jenna’s forty-page feedback report showed each rater groups’ answers to every question about her. And many questions had been asked.

Different data compared her to others in her cohort and to comparable leaders in non-profits across the U.S. and globally.

Having seen instruments like this for years, a quick glance showed me that Jenna’s data was positive and strong. She had areas for development, of course, but she had many more strengths. Overall, the report showed that people liked the results she was getting and they liked her personally. Jenna was excelling across many measurements. I wasn’t surprised at all.

“It is a long report,” I agreed. “But someone’s going to debrief it with you, aren’t they, Jenna?”

“If they’re intending to, they haven’t told me. But it’s a pilot. Maybe they will.”

“You should ask, but I’m guessing they will.”

“Do you remember debriefing my 360 with me? I’m glad you were there when I read it. That was a lot to take in. But that was the opposite of this.”

I said, “I remember you saying the feedback stung you, but it didn’t wound you. I’ve never forgotten that.”

“It did sting!” she said. Then, getting a new idea, “Have you ever had to scrape someone off the floor from a 360?”

“There was one woman,” I said sadly. “She was not prepared for the feedback. Not in any way. People had been upset with her for years, but she’d never gotten the feedback. So when the dam finally broke, all that pent up frustration steamrolled her. I felt really sorry for her. And I felt her boss had done her a disservice by not giving her feedback along the way.”

“Poor woman. Sounds dreadful.” Coming back, she sighed and smiled. “That wasn’t my case! I don’t think there was anything in my report I hadn’t heard before. I’m guessing it’ll be the same for Alex.”

“That’s what usually happens,” I said. “It’s pretty rare that someone reads their report and is shocked. The more typical reaction I get is ‘my husband’s been telling me that for twenty years’.”

Still thinking about Alex, she said, “How do I tell him he’s getting a 360 without making him all freaked out?”

“Why would he freak out?” I asked.

“He might think he’s in trouble or that I’m trying to send him some message.”

“Well, giving someone a 360 is sending that person a message, Jenna. You are publically turning the spotlight on that person. That’s most definitely a message. The question is, what message do you want to send Alex with his 360?”

“That he’s a rock star. And I think it will help him, because we’ve all got blind spots, right?”

She smiled. “Probably not. But 360s do get used to send that kind of message, don’t they? ‘Hey, bub! Enough is enough! Shape up or ship out!’”

I nodded a reluctant yes while saying, “They do, but 360s don’t usually work as performance management tools. If the person isn’t already getting the message, what’s the 360 supposed to do? Flip a switch in someone? That doesn’t happen. Well, actually, I did see it once. But it’s pretty rare.”

“What happened?” she asked.

“With the switch? Oh, it was this genius Israeli scientist. He thought his job was to be the smartest guy in a company of about eighty thousand. He treated his team of amazingly brilliant people like assistants. Everyone was furious with him and he was completely tone deaf. So when the 360 came around, they really blasted him.”

“Oh my gosh, did his head explode?”

“Quite the contrary! He read the feedback and the switch flipped. He understood it in an instant. He transformed overnight. We still had a lot of coaching to do, but only fine tuning. The giant transformation happened on day one. From a 360! That just doesn’t happen. It was amazing.” 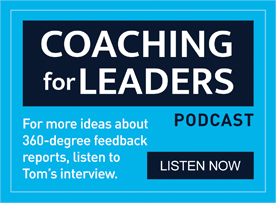 Then, grabbing the report again, she said, “Do you know what? This data was not private! Anyone who worked on the pilot saw everyone’s report. And we all saw each other’s.”

“And you weren’t told ahead of time?” I asked.

“Well, I’m sorry you weren’t told, but it’s not unusual to share data when a pilot is being launched. Or in an MBA program. Or a leadership development program.”

“It makes me wonder if I would have changed my answers if I’d known people were going to see each other’s scores.”

“Well, what if it ultimately affects someone’s bonus or a promotion opportunity? I don’t know what’s going to happen to this information.”

“Then ask, Jenna. I’m sure someone knows the plan. If the organization is going to roll this out, you’ll probably be asked to give feedback again. You should trust how the reports are going to be used. Good point.”

With an arched eyebrow she asked, “No one saw the 360 I did with you, did they?”

“No, they didn’t,” I answered. “But yours was tied to one-on-one coaching. This one is tied to a company-wide program.”

“Did anyone ever ask to see my feedback?”

“No, but in coaching, it’s usually understood that the person receiving the 360 is the only one who’ll see the report.”

Before you read your 360

She asked, “If I get permission for Alex to complete your 360, would you debrief him?”

“Happy to,” I said. “And before I hand him his report, I’ll tell him the same two things I told you.”

She perked up. “I only remember one. I remember you were about to hand me my 360, and you said to me, ‘We’re only looking for themes. Themes become goals. Only look for themes.’ Oh! It was so hard not to get all distracted by some of those individual comments. Do you remember the one about playing in the sand box? I still think of that one word for word sometimes. But I stop myself and say, ‘No! Jenna! Look for themes! Themes become goals!’”

She asked, “What’s the second thing you say before you hand someone their 360?”

“About editing the movie?” I asked, trying to jog her memory.

She shrugged. “I got nuthin’.”

“It’s about not taking it all so personally. And taking the long view.”

She motioned for me to keep going.

“This is coming back,” she said.

“Then, if you’re lucky,” I continued, “some day in the future you’ll get more reviews, and you’ll find out what people think about this new version of the movie. And the movie called Jenna just keeps getting better and better.”

“I do remember that,” she said. “That did help me take it a little less personally.”

Jenna felt strongly – and I agreed – a 360 can accelerate your progress down the road of The Look & Sound of Leadership.