Two coaches discuss how to help an introverted leader display more executive presence. They explore a visualization technique that’s designed to make the impression you want.

Melinda called asking if she could pick my brain about a woman she was coaching.

I admired Melinda. She was a powerful consultant and coach. She and I had collaborated often and loved to talk shop.

She said, “This woman is super smart and super introverted. I mean off the charts introverted. Not surprisingly, her boss is pushing hard for her to have a bigger presence. I thought you’d have some exercises I can use to help her.”

“And the goal of these exercises would be that? For her to have a bigger presence?”

“Have you done any visualization work with her?” I asked.

“I do. I call it ‘Animating Your Persona.’ I use it when clients want to think about some part of themselves differently.”

“That sounds great for her! Can you explain it to me?”

Drawings that make you feel

I was excited to talk about this with her. I said, “Oh, good! Well, first, there’s a backstory. I’ve had this idea since I was a boy. I remember watching Saturday morning cartoons – “

“ – and being fascinated that cartoons were drawn by people called animators. To me, animators were amazing because they could draw things that would make me feel something. Think about that! These artists could draw a series of pictures, and when people watch them, they feel what the animator wants them to feel. That’s an amazing gift.”

“Sounds a little Machiavellian to me!” she laughed.

“It’s not meant to be,” I said. “Yes, animation tries to make us feel things. But only like any story would. And, when you’re animating your persona, the story is about you. You are the hero. But you’re not tilting the playing field. You’re not making people into villains. You just want people to see you the way you want to be seen.”

“Which could be manipulation,” she said with a bit of teasing.

“She would benefit from that,” she said, agreeing. “So was that the backstory?”

“It was,” I said. “So here’s how ‘Animating Your Persona’ actually goes. You’re going to ask this woman to picture the goal – have a bigger presence – as if she’s an animator creating a character in a scene. Her job is to animate that character so people feel about her the way she wants them to feel.”

“Wait!” she said. “Instead of explaining it to me, could I just be this client? I’ll learn it better that way.”

“Okay. I’ll speed you through the big chunks. But you could make these steps into homework or spread them out over time.”

“So, Suzy,” I said, “first you get to name your character. She can’t just be Suzy. What do you want to call her?”

“How about Suzy Speakup?” she perked.

I laughed. “That’s a great animation name. That helps keep it a cartoon.”

“Sorry to interrupt, but can I ask, why’s animation important at all?”

“Because animation gives you permission to use your imagination and exaggerate things so you can get a better sense of them.”

“Well, like this,” I said. “What do you want all of us to think about Suzy Speakup? How are we supposed to feel about her?”

“People are supposed to take some notice. Suzy Speakup is going to be bold.”

“All right! And is it important that people take notice and she be bold?” I asked.

“It better be important!” she said.

“I agree!” I said. “In animation, we only care when things are important, when there’s something at stake. No one wants to watch a scene where the outcome doesn’t matter.”

“Well, it matters that Suzy Speakup be bold!” she said firmly.

“Excellent,” I said. “Now let’s focus in on that word ‘bold.’ Are you sitting or standing?” I asked.

“So how would Suzy Speakup sit if she were bold? If she were going to make people take notice?”

I sensed some shift. She chuckled. “I can feel that.”

“Okay! Now change focus and be the animator. Picture Suzy Speakup with that bold feeling in her chest. You’re going to focus on that. By the way, what’s she wearing?”

“Just that? Remember. It’s a cartoon and you’re the animator. You can use exaggeration to help us feel what you what us to feel. Is there something about her clothes you might emphasize?”

“I have this vest that I wear. I’d give her that and really shoot the collar out wide.” She gave a little laugh.

“Terrific,” I laughed, too. “Now go back to feeling ‘bold’ in your body. How is the animator going to draw that feeling?”

“I’d shoot the collar out really wide! Shoulder pads, too, I think!” She laughed even more.

“So you have bold in your body,” I said.

“Next, let’s choose a name for the scene. Suppose that six months from now it’s just one scene of many you’ve animated. How would you refer to this scene? What would you call it?”

“Ooh, the hero’s journey! Perfect for animation! OK. Now focus on the setting. Where is one place where Suzy Speakup is going to be bold?”

“Where does it happen?”

“In the conference room,” she said.

“Good. We don’t have time for it now, but this is where I would ask you to picture the entire scene in detail. Who are the other people? What is each one like? Where do they sit? What’s the time of day? What’s the lighting?”

“Really visualize it,” she said.

“Exactly. And then I’d ask you this: who’s point of view do you have?”

“So you’re looking at the meeting through the eyes of Suzy Speakup?” I asked.

“And also seeing myself from behind.”

“Over the shoulder, as we say in the business?”

“It is,” I said. “But think about this. You’re the animator. You can take anybody’s point of view. So you could look through the eyes of the most senior person there. Or the most junior. Or your best friend. Or your enemy. And every time you take someone else’s point of view, you look at Suzy Speakup. And you ask, ‘Does this person think Suzy Speakup is bold?”

“And if not, how could I make that happen, right?”

“Lots of choices,” she said, pleased. We both knew that choices help clients find their power.

“The moment I speak up for the first time,” she said.

“Ah-ah-ah!” I said, as if correcting a mistake. “It’s not you speaking up. It’s Suzy Speakup speaking up.”

“Oh, right! When she speaks up the first time.”

“Now really take a look at her. What is going to be different about her this time?”

“Different in what people see in her or what she feels in herself?”

“She’s going to give herself permission to speak,” Melinda said warmly.

I repeated, “She’s going to give herself permission to speak. And when she speaks, what will people see?”

I took a breath and broke whatever spell was left. “Okay, Melinda, you see how this works, right? You’re going to help Suzy see herself as a hero in that small moment. Then another moment. And another. Creating a bigger presence one moment at a time will help her achieve the goal.”

“Good catch!” I said. “It’s not consistent. This has another backstory to it. When I was a kid, I remember seeing a segment about the animators who worked with Walt Disney. They all had mirrors by their desks. Sometimes they’d look in the mirror to see how a feeling would look before they recreated it on paper. They’d watch themselves until they could see the feeling in their body.”

“Are you suggesting Suzy work with a mirror?”

“She could. If it helps her,” I said. “I never liked working with a mirror when I was an actor. Some people do. But I’ll say this, looking in the mirror gives you distance.”

“Says who?” she asked, clearly not agreeing.

“Looking and asking, ‘Does my image in this mirror make the impact I want?’ gives you distance.”

“OK,” she said. “So here’s my second idea. I’m not so sure our friend Suzy can manufacture behavior. And if she did, I think she’d argue she’s being a phony.”

“Ah, ‘The Phony Conversation,’” I said. “Do you have that conversation with people?”

“About whether new behavior is fake just because it’s new?”

“Not often. If I did, I think I’d try to keep them connected to why they’re doing it in the first place. Ask them to be as intentional as possible.”

“That would work,” I said. “When I have that conversation with people, I often use the gym metaphor. They’re trying to build one specific muscle –“

“Right. I’m their trainer. I’m going to put them on some machines and show them some exercises so that when I’m gone, which someday I will be, they’ll know how to strengthen that muscle by themselves. It’s skill-building practice.”

“Nice!” she said. “But what if she can’t manufacture behavior in the first place?”

“I don’t buy the premise of the argument, Melinda,” I said. “We all manufacture behavior. We don’t come in Monday morning acting like Saturday night.”

“This woman’s a heavy introvert,” she said skeptically.

“Look, we’re not asking for a makeover here. This is about her getting some distance and making some choices.” I said. “Do you know the self-portrait by Norman Rockwell?” 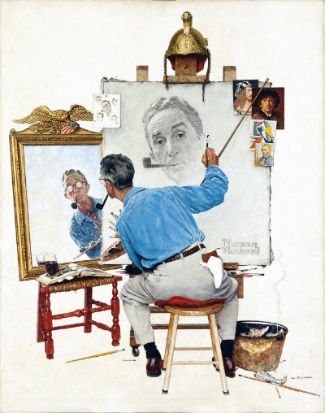 “Where he’s painting himself?” she asked.

“Right,” I said. “We’re behind him as he leans away from a big canvas to look at himself in the mirror. And on the big canvas he’s painting a portrait of himself.”

“I remember the lenses in his glasses were like silver discs,” she said. “You couldn’t see his eyes.”

“Right,” I said. “But on the canvas, his eyes are clear as a bell. And that’s why this relates to Suzy. The portrait he’s painting on the canvas is not what he sees in the mirror. He’s choosing what to put on that canvas. He’s the animator. His pipe is a little straighter. The glasses are gone. There’s a glint in the eye. But it’s still him. He’s not trying to trick anyone. He’s being very intentional.”

Melinda said, “‘Animating Your Persona’ is going to give Suzy choice about how people see her.”

Surprisingly, Suzy found it easy to animate her persona. What was not surprising, was that it gave a boost to her Look & Sound of Leadership.