Knowing she’ll be featured at her company’s upcoming user conference, a leader asks her coach for help not freaking out. He shares an image from his time as an actor in Hollywood.

Erin admitted to being freaked out. And she was angry with herself that she was.

Erin was going to be a featured speaker at her company’s upcoming user conference. This yearly event stretched over three days and attracted thousands of people from around the globe. Erin’s topic and time slot were prime. She was feeling the pressure.

I met Erin for the first time when the event was ten weeks away. She’d known for months that she’d be speaking. Now she was finalizing her slides and carving out large blocks of what she wanted to say.

After a long list of concerns, she said, “And last but not least, I’d like help with not being so nervous. I’m usually not nervous. But, like I say, this conference has me freaked out.”

“What’s got you freaked out exactly?” I asked.

She burst out another list of concerns, then said, “And aside from all those attendees staring at me, my boss is going to be there. And the whole team. If I blow this, I could really set myself back. I could even get fired.”

“Really? You could?” That seemed extreme.

“Well, no, I suppose not, but it sure would be hard to show my face the next week.”

“Wow. What would have to happen to make them think so badly of you, Erin?”

“If the users walked out.”

“Is that likely, Erin? I don’t know this conference. Does that happen sometimes?”

She considered a second, then smiled, then relaxed her whole body. “No, it doesn’t.” Then, with a staccato laugh, she said, “Ha! Watch me be the first!” Then, “See how I talk to myself? I hate being freaked out like this. I’m usually not, I swear.”

“How do you usually calm yourself down?” I asked.

One thing at a time

She gave another scornful laugh. “I take up meditation again. I’m a real fair weather friend when it comes to meditation. Not disciplined at all. I just pull it out when I need it – which I know makes it pretty useless.”

“I don’t think so,” I said. “My feeling is that even sixty seconds of mindfulness improves whatever comes next. We could do it right now and see.”

That sounded great to her, so I guided her through a few minutes of relaxation and focus. At the end, when we both opened our eyes, she was far away, thinking.

I waited, curious to see where she’d land.

Her idea triggered one of my own. The memory made me smile. She noticed and asked what I was thinking.

I said, “’One thing at a time’ was the very core of an image I used for years to get myself focused.”

“What was the image?” she asked.

She said she did, so I began.

“Let me tell you the context first,” I said. “I used to be an actor in Hollywood.”

“I did! The thing about being a working actor in Hollywood is that you audition a whole lot more than you work. And auditioning is crazy-making. It’s a horrid system, but no one’s found a better one. So everything’s out of balance to begin with, usually not in your favor, and you have something at stake. Maybe it’s a career move. Or that month’s mortgage payment! Or maybe it’s just a part you really want. It could be a million things. But if you can’t get focused and nail the audition, all those things are just distractions. They make you worse. If you want to compete, you’ve got to get rid of them. Which is why I made up this image.”

“Cool!” she said, shifting in her chair.

I took a breath and got quiet. Then I said, “I’m standing at the edge of a big pond. Everything is completely still. The sky is gray. There’s no sound. No wind. The water’s like glass. And I am there for a purpose.

“At my feet is a mound of pebbles. My purpose is to take one pebble and pitch it out into the pond at just the right spot so it doesn’t sink.”

She smiled, not understanding yet, but eager for more.

“Out in the pond, under the water, is a bigger mound of pebbles made up of all the pebbles I’ve ever pitched before.

“If I want this pebble in my hand to balance on top of all those other pebbles underwater, I have to get focused. And this isn’t pretend. This happens. Sometimes the pebbles don’t sink. That’s a job I land. And it does happen! So I know it’s possible. But I have to be focused.

“I tell myself nothing matters but the pebble in my hand. Not the pebble I threw before. Or the one before that. Or the ones still at my feet. I have to get focused on just this one pebble.

“And then I pitch it. And it hits the water. And whatever happens happens. And I say ‘Thank you very much. Next pebble!’ I try to remember there are more pebbles at my feet and no one pebble is going to change my life. Every pebble counts or none of them count.”

She sat with the image for a minute. Then she nodded her head, saying, “One thing at a time.”

“Tell me the truth. Can you really detach from the outcome like that?”

“I’m better at it now. But I got pretty good at it,” I said. “What made the difference was when I could really believe there were more pebbles at my feet. Believing in abundance helped me. And things happened that proved it.”

“What kind of things?”

“Well, here’s my favorite story about that,” I said. “In the 1980’s, there was a television series on CBS that was a huge hit. The person who did the casting liked me and called me in during their first season. I didn’t get the job, but the producers seemed to like me and they called me back later in the season.

“That was only the beginning!” I said. “CBS aired this show for seven seasons. That’s a lot of seasons! And every single season, I’d go into the same room and read with the same casting director in front of the same writers – some seasons more than once! But I never got cast in that show. For seven years!”

“Were you pissed? I think I’d be pissed.”

“I tried not to be. Being pissed wasn’t going to help me pitch that pebble! But here’s the point of the story.”

“There is! Fast-forward a couple television seasons. I get cast as a guest star on a sitcom over at Warner Bros. On the very first morning, as we’re all gathering to read the script for the first time, this guy comes walking over. He looks vaguely familiar but I can’t place him. He introduces himself and says he’s one of the producers. Then he says, ‘You remember that show at CBS you used to audition for?’ I say yes, and he says, ‘I was there the last couple seasons and I always liked you. I was sorry you didn’t get cast. So when they put your name in for this part, I pushed for you. I’m really happy you’re here.’”

“That was an extreme example, but experiences like that helped me remember – you never know where the ripples end up going.”

Erin developed her own imagery that helped her create calm. Every now and then, as we worked together, she’d laugh at herself and say, “Wait! I just pitched about twenty pebbles all at once. Let me get focused.” Then she’d close her eyes for a minute. When she re-opened them, she was always a little better able to experience The Look & Sound of Leadership. 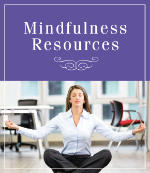