How to Re-engage a Team

Worried that working remotely has disconnected her team, a leader asks her coach for help and learns a powerful tool.

How to Re-engage a Team

Neela loved leading teams. During our very first coaching conversation she talked about the various efforts she’d put into building her current team. Then COVID hit. While the team’s productivity remained steady, she felt their spirits had withered.

“Isolation has fried them. The energy on these calls is deadly,” Neela said. “And we won’t be back together again for a few more months, at least. I want to give them a shot of energy but don’t know how. Do you have any tricks?”

“When you say the energy is deadly, Neela, what do you mean?” I asked.

“People have stopped participating. I’ll ask a question and there’s silence. It’s like pulling teeth. It didn’t used to be that way. What? Why are you smiling like that?”

“Well, I don’t know what’s going on with your team. It could be any number of things, right? But there’s an exercise I use with teams that generates interesting conversations. You might like to try it.”

“Will it work on Zoom?” she asked.

“Yes. Or in person. I’ve done it both ways. It works in either setting.”

“It’s from a group called Liberating Structures. It’s an exercise they call ‘Drawing Together.’ The purpose of the exercise is to create conversations among people about a shared experience. The exercise gets them out of their head. It taps into a different part of their brains than they’re used to, so the conversations are interesting. Plus people have fun while they’re doing it.”

“Neela, instead of me telling you about the exercise, let’s just do it together. It’s designed for a group, but it’ll work with the two of us. You willing?”

“Okay. To start, we’re both going to need paper to draw on and things to draw with. Pens. Pencils. Markers. Crayons. Whatever you’ve got.”

“Blank paper, right? Not my note pad,” she asked.

“Okay. I’m going to go raid my son’s art box. Be right back.” While she went gathering, so did I. When we were both back on camera, she gave a nervous laugh. “I’m an awful artist. I can’t draw to save my life.”

I nodded. “People say that all the time. And here’s what I say. What we are going to do together is not an art project. No one’s expected to be an artist. We’re just going to draw symbols. Five symbols. Symbols everyone can draw. No artistry involved. What do you say to that?”

“I’m still a terrible drawer. I just won’t be embarrassed about it. So what are the five symbols?”

“Make a five-pointed star, then change the point on top to a circle.”

Her marker was poised.

I went on, listing, “The circle represents wholeness. The rectangle represents support. The triangle is a goal. The spiral is change. And the star-person represents relationship.”

“Maybe,” I answered. “But it could represent a team. Or the company. Or a country. Whatever.” 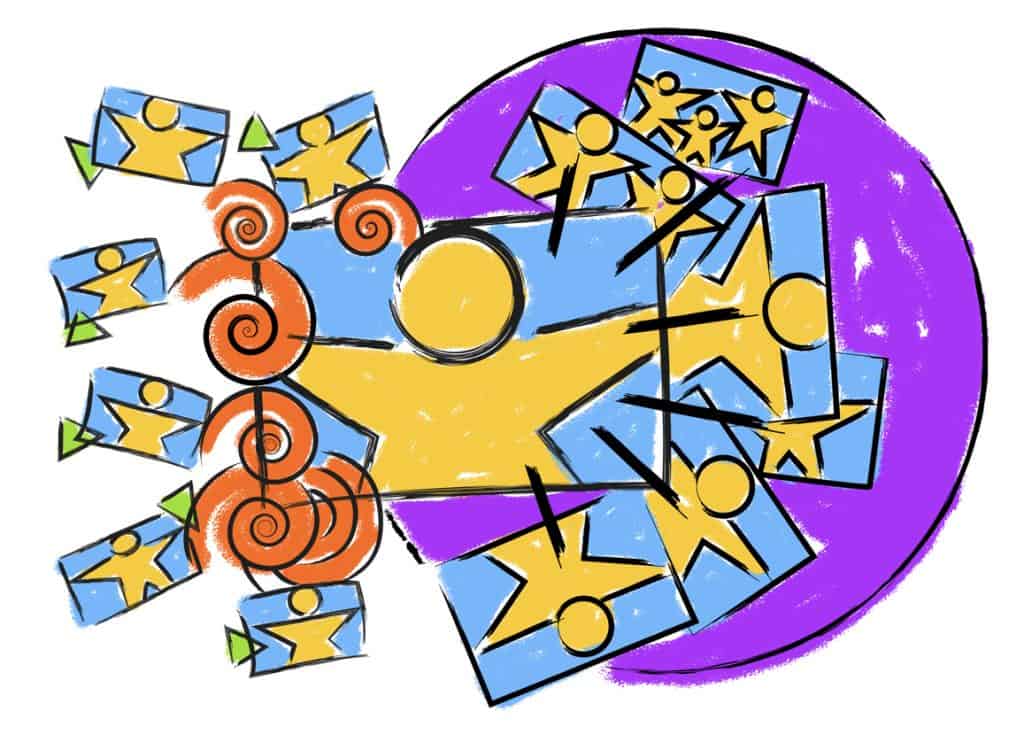 She asked, “And what’s the story we’re trying to tell?”

“I’ll get to that, but I want to give us a chance to warm up. Most of us don’t draw very much. I want us to take five minutes. Make shapes. Play. Get into the rhythm of drawing.”

She said, “Five minutes is a luxury. This is great.”

We both set to drawing. Our mikes stayed open and we made small comments now and then. Whenever I looked at her, she seemed completely engaged.

Quietly, she said, “I’d like to hear why we’ve stopped talking to each other. Is that too risky?”

“Maybe. No, I think they could handle that. If not, ha! We could tell the story of last summer’s product launch. I’d love to see how they’d draw that experience!”

I said, “Either one sounds great. Let’s suppose the team focuses on the product launch. Here’s how I’d explain the next step. ‘You know the five symbols. You know what they mean. Now, think about the product launch. That was an experience we all shared. Everyone is going to draw the same experience from their own point of view. And everyone is going to use the same five symbols with the same meanings. No words. No labels. You’re going to ask yourself, where did that journey start? Where has it gotten us? Then you’re going to depict that journey using only our five symbols.’ That’s how I’d tee-up the next step.”

“These first sketches? No. This is just play time.”

“So I can put my perfectionist to bed for a minute, eh?” She turned towards her pages with a happy, hungry look.

For 10 minutes, we sketched in almost total silence. Then she said, “What’s next?”

“Now we pick an idea from our sketches and we create the clearest story we can.”

“This is the one we’ll share, right?” she asked.

“Right,” I agreed. “I find myself changing things for emphasis. I’ll make a symbol bigger or smaller. I’ll move something towards the center or towards the edges.”

She nodded, turning to her page. Mostly to herself, she said, “Depict the journey in symbols.”

After ten minutes, I said, “Now we share, with one catch. Remember I said there are no words? Well, that not only applies to the drawings. It also applies to the drawers. In this step, everyone talks about the drawing, except the person who drew it. Suppose we were a group of four, which is how I usually do this. The other three people would look at my drawing and tell each other what they think the symbols mean. They’d interpret my drawing but I may not speak. At all. Even though they’ll probably put a different interpretation on my drawing than I intended.”

She said, “But I thought the point was to start conversations. How can we start a conversation if one person can’t speak?”

“Well, they can, eventually. But not in this round.”

We observed the ‘silent artist’ rule while we talked about the other person’s picture. At least for a bit. Then we naturally fell into trading COVID stories. It was a comfortable, intimate sharing.

After a bit, Neela said, “That felt pretty easy. It would be wonderful if the team could talk to each other again like that. So what’s next?”

I said, “Next, each small group of three or four talk among themselves and figures out what they want to tell the other groups. What themes emerged from their drawings? What ideas showed up in common? This is not the time to begin proposing fixes to problems. This is a time for telling the stories of the pictures.”

“And then we get to talk about whether the pictures are telling the story we want told about us. That’s great. I’d love to hear their ideas about all this.”

She said, “Listen, I’m pretty good at leading activities like this. I like doing them. But I always wonder, are there traps I should watch out for?”

“I’d give you two heads-up. The first is something you did already. ‘I can’t draw.’ People say that a lot. That’s pretty normal resistance. Be ready to help people over that hump.”

“I’ll use myself as the example,” she said. “What’s the other one?”

“Time,” I said. “You have to be comfortable allowing this to take its time. Don’t rush it. Asking people to draw is asking them to wake up a part of their brains that most of us don’t exercise very much. Give people time to bring their brains online.”

“I can feel that in myself,” she said. “It’s like I’m stiff. But exercising that non-verbal part of me felt good. So how long does this whole thing take with a group? Start to finish.”

“Time well spent, as far as I’m concerned. When I think about the various possible conversations we could get out of this, it really excites me.”

Neela was bold. She slotted time for the ‘Drawing Together’ exercise at her very next team meeting. Afterwards, she felt it had been more successful than she’d hoped for. She was relieved to see her team drawing together and heading their way back towards The Look & Sound of Leadership. 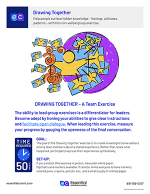